Bollywood and India complement each other way too much. So much so that Bollywood has found its way and has crept into the most desired spectrum of the masses: the food sector. It is not at all unusual to come across, Bollywood themed nights at various restaurants which are cropping up like a swarm of locusts everywhere in the country. On trying to figure out how Bollywood theme has managed to attract so many eyes in recent years, we tried to analyze the mind of both the customers and the restaurant owners who have managed to curate such nights and now even come up with Bollywood themed restaurants.

On having a candid conversation with Mickey Mehta, owner of Garam Dharam and Sahil Gupta Co-owner of TabulaBeach Cafe, we came to know that Bollywood themed nights and restaurant have become the most preferred idea for most restauranteurs in the present times.

To understand where the idea of starting a Bollywood fun themed restaurant which led to the creation of one of our favorite desi party places, ‘Garam Dharam’ came from, we had a word with Mickey Mehta; a fan of Bollywood themed nights and the man behind Garam Dharam. We wanted to know what had made Mr. Mehta venture into the domain of starting an Indian themed restaurant. During the conversation, he very blissfully stated that when he was planning to start his restaurant, he met Dharmendra and his interest in starting a public restaurant, a restaurant to which Indians could relate to, where everyone could come and dine with their family at affordable rates got augmented. Dharam Ji is a well known Indian Punjabi actor and his love for food is known to everyone. So when Mr. Mehta spoke to him about the concept, the later liked it and the ideas were put into force without any further delay. With the earnest intention of making the restaurant as desi as possible, Mr. Mehta stated that they play catchy Bollywood songs, the interiors are filled with posters from various iconic Indian movies and ambiance matches with the ‘desiness’ of the Indian movies, so the restaurant is as close to its Bollywood theme as possible. His interest in being desi was so strong that in Garam Dharam liquor is served only in “pauwa, addha, and khamba.”  Micky thinks that Bollywood touches the Indian heart and that is precisely what he had tried to capture when he ventured into the F&B industry. His take on the trend is less to do with mere Bollywood themed nights but is focused on creating the ‘Desi’ Bollywood feel that all of us have grown up loving! A Mere Selection Of A Bollywood Themed Night Isn’t Enough; You Need To Do A Lot More To Make The Night Successful- Sahil Gupta; TabulaBeach Cafe

While Bollywood themed nights and events are popular everywhere and are almost like a daily affair, in Tabula, it happens once a while. Why? Because they like to keep all their events exclusive, and prefer to live up to their motto- “Tabula does it differently.”

We can see different Bollywood themes brought into force in Tabula, be it “Om Shanti Om” where they created the Om Shanti Om theme with vibrant colors and curated a very glamorous and opulent environment, or “Disco 82” where they pay tribute to retro Bollywood. But just organizing Bollywood themed nights is not enough. As per Sahil Gupta, the co-owner of TabulaBeachCafe, “Setting up the decor according to the theme is the most difficult thing.” He stated that he is thankful to have received an excellent event management team, in-house, which creates, innovates, conceptualizes and sources excellent decor at a very affordable price from different vendors. Tabula Beach also has a tie-up with Partylicious, formerly called as Party Hunter, which is Delhi’s only and best shop for all party equipment. Tabula partners with this shop, who takes care of all the decor and in turn, Partylicious gets all the publicity. 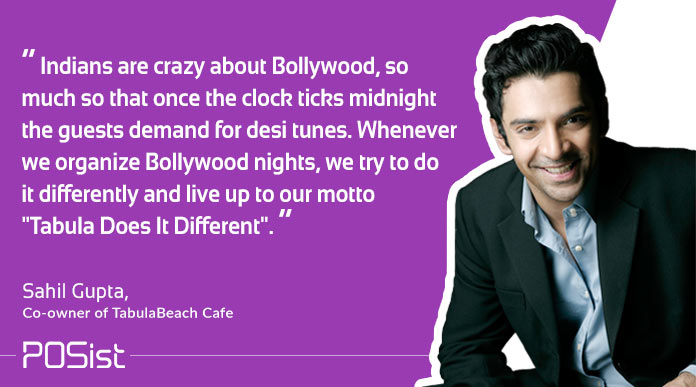 Sahil stated that Tabula not only changes the decor as per the theme of the event, he also gives due attention to the menu. During Desi Bollywood themed nights, Tabula tries to bring to the menu various Desi Food and Indian craft cocktails. When speaking about the innate nature of Indians, he stated, that “whether it is a Jazz night or a Hip Hop night at Tabula, the guests after some time do demand for Bollywood music, this shows the craze that Bollywood has on Indians. However, we try and abide by the theme and play songs as per the theme of the night only”.His brand is surely one of the most authentically themed restaurants in Delhi.

Mr.Gupta signed off with a very very special invitation for all your Bollywood lovers out there. He stated that “We are starting a very special Bollywood based event from 1st February, every Friday, which revolves around Bollywood music. I would not reveal the intricacies as of now. But what I would like to tell is that it has to do with Bollywood, and with India. There would be some dancers some performers involved so that we will be taking it to the next level.” Bollywood themed nights and restaurants are cropping up in a great way. Mumbai is nowhere behind the race of having the best-themed restaurants in India. One such restaurant was inaugurated in Navi Mumbai, named, Nau Se Barah, will keep your eyes hitched to the Bollywood film studio decor and the photo frames adorned with unforgettable dialogues from the Hindi cinemas./restaurant-times/features/bollywood-theme-restaurant-ideas.html

There are multiple such Bollywood themed restaurants that are found in Delhi. Some of the prominent ones are, Box Office Cafe, Filmy Cafe, IIFA Buzz Cafe, Mumbai Matinee, and Lights, Camera, Action. These restaurants whose interiors, menu, ambiance and everything that you can think of revolves around Bollywood, is all ready to keep the customers hitched to the ‘desiness’ of Indian cinemas.

This clearly shows that the craze for Indian cinemas and Bollywood themed nights and restaurants are in no way going to feather away. On the contrary, we are about to see more such restaurants and nights coming up where we can all pull out our desi avatars and dance to the tunes that play the strings of our heart in the perfect way possible that will help you to have a sprawling restaurant business.

Nobody could have predicted that the pandemic, which culminated in total lockdown in March 2020, would have such severe financial consequences. With restaurants shuttered,...

A Castle Of Culture: Byg Brewski