Home Features Splitting Bills: All You Need To Know As Diners Go The Dutch... “Let’s go Dutch” or “Dutch the bill,” is a phrase that has become extremely common in terms of usage and popularity among the masses lately. The term indicates that each person in the group while dining out pays for their share. The practice of splitting bills is more popular among the youth, as the masses are becoming more financially independent, especially women, and have become used to paying their restaurant bills.

There are many theories about the origin of the phrase ‘Going Dutch,’ with different interpretations. The most popular belief is that Holland has the custom of people of all genders being treated as equals. Therefore when two people go out and have a great meal together, both of them pay equally, i.e., they split the bill or ‘Go Dutch.’

Back in the day, the eldest male in the group was expected to pay for the entire meal, and it was socially unacceptable for anyone else to pay. It is, in fact, a real problem that many (especially broke-singles, and end-of-the-month-out-of-cash kind of people) face, but are too embarrassed to speak.

And it’s not just a Tinder date we’re talking about. At high school reunions, get-togethers, and while eating out with friends or colleagues, the issue of the bill settlement always arises, where gauging the right amount of money to be paid by each person can be troublesome. The stress of paying the bill can take the joy out of the dining experience.

The Tradition Of Splitting Bills In Restaurants

The Dutch tradition of splitting the bills after dining out solves this problem. The practice has caught on fast and is now socially acceptable especially while eating at restaurants across the globe.

Even when the group volunteers to pay for their individual orders, they always conveniently forget to add the tip and the taxes. The result: the one making the final payment ends up paying the tax, even if the rest of the money is reimbursed. Often, people do not bring up this issue out of embarrassment, and someone always ends up paying more than what they ordered. After all, it’s never more than a couple of bucks, and it seems petty to bring up the issue when everyone has already split the bill and is paying for their share.

It is also interesting to note that people end up ordering for the more expensive items on the menu when they know the entire amount is going to be split evenly.

As a group, we are prompted to spend more at the time because of which per head expenditure rises compared to when one is paying just for themselves. When on a budget, splitting bills evenly can still be hefty on the pockets.  Therefore, a more cost-effective way is to pay individually for orders. There is no longer a social stigma involved, and everyone is unabashedly and reasonably, only paying for what they ordered.

Easier said than done, calculating how much you owe when you’ve had more than one item on the menu, shared an appetizer, or have had cocktails that resulted in added liquor tax can be mindboggling. It is a tough task for your server as well, who has to remember who ordered how much of what.

Therefore, to resolve this mumbo-jumbo of arithmetic, restaurants are now turning to sophisticated POS software that simplifies the entire process. A smart restaurant POS takes care of all customer demands of splitting bills.

Ways To Split A Restaurant Bill

As mentioned earlier, there are many ways in which you can split restaurant bills. Moreover, now you no longer have to manually split the bill as your POS can do the math for you and generate split the bills for the same table. This innovation in restaurant billing has made life easier for both the restaurant manager or owner and the customers who can now easily dutch the bill in one of the following ways:-

Now that you know the different ways in which you can split the restaurant bill, the next thing is to understand how the splitting works and how your POS can help you out!

1. Split The Bill Evenly Among The Customers

Splitting the bill evenly among the diners is the most convenient method of Going Dutch. The number of guests evenly divides the entire bill, and each person pays an equal share, regardless of his order. This is usually done just to calculate how much money each person owes to settle the payment. It is also not requested often, as customers usually figure it out themselves.

2. Split The Bill For Drinks And Food

At each party, there are two types of guests; drinkers and teetotalers. In all fairness, the cost of liquor is way more, and it seems harsh for the non-drinkers to pay for the expensive drinks. Also, the liquor tax is also more. Split the bills feature for food and drinks to resolve this issue and are also the most common request for split bills. Thus a POS which can generate two separate bills for the same table and the same order to be presented to the customer and process payments through two different cards or cash and a card is extremely useful in this scenario. 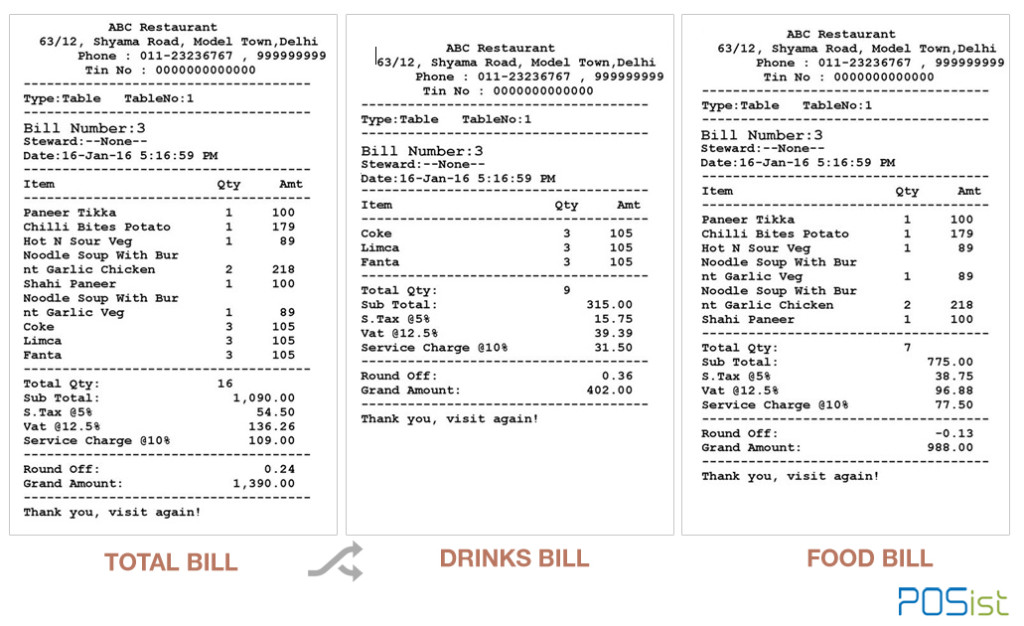 3. Individual Billing For All The Guests

Separate bills for individual guests can be generated upon request. In large parties especially, each guest orders food for himself. For example, one may order a steak platter, and the other just soup. Splitting bills for both of them ensure that each person pays for his order. Even when people are sharing appetizers, the POS ensures that the bill is rightly divided.

Splitting Of Bills Used As A Marketing Technique

Offering the option of generating split bills can be used as a marketing technique as well. It is an excellent way to catch the customers’ eye and strikes a chord with most people.  It is also a brilliant marketing strategy to brand your restaurant pocket-friendly.  Restaurants promoting and endorsing the split bill feature attract more customers as it resolves the dilemma of bill settlement while dining out.

The only problem is that many restaurants may not have the option of presenting separate bills or do not endorse this wonderful feature even if they do. Customers may hesitate to ask for a split the bill, but if they know that this is an acceptable option, many would certainly ask for it. Unless explicitly offered, this feature is wildly ignored. Find out how to implement this useful little feature in your restaurant here.

Using proper restaurant management software helps you to prepare separate bills for each of your customers, and makes them want to come back to your restaurant due to the comfort factor.

Help out your customers by minimizing the damage of a crappy Tinder date; ask them if they want separate bills! Chances are, you will be tipped extravagantly 😉

How India Eats Out? Is A Food Evolution Happening?

Top Restaurants in Chandigarh that You Must Visit