Home Foodpreneurs The Man Who Brought In The International Touch To Moti Mahal- Monish... Running a restaurant brand that had its inception right back at the pre-partition times, isn’t an easy task. Notwithstanding the predicament of the situation, Monish Gujral took on the challenge rather well and strived hard to pave the path of the Moti Mahal brand to new heights. In a candid conversation with The Restaurant Times, Gujral reveals the journey of Moti Mahal, how they ventured into this volatile domain of the F&B space and managed to maintain their iconic status all these years. Currently, there are 10 different chains under the parent brand name and is a global chain of restaurants with over 120 franchises in India and around the world.

In Conversation with Monish Gujral of Moti Mahal, One of the Oldest Restaurateurs of the Country

The first Moti Mahal was established in Peshawar and the restaurant soon became popular amongst both the Indian and the Britishers.

After the partition, the Indian journey started, the first outlet came in Daryaganj in 1947. This outlet too became a success, precisely because the Delhiites had not tasted the North-West frontier food with the Punjabi essence.

And thereafter the success continued. The expansion of Moti Mahal in South Delhi began in the 1970s. Monish started getting attached to the brand in 1983, right after school as an intern and the journey that began as an internship became his lifelong partner. He continued to work even when he was in college. On his first day at work as an intern he was not allowed to sit at the front office, on the contrary, he was asked to work in the kitchen. So, in his three years of college life, he learned how to cook, and worked on gathering comprehensive knowledge about the backend management of a restaurant. For six years, he kept on dwelling on the backend operations. Only after he received his post-graduate degree was he shifted to the front office.

While this period might have drained Monish, he did not know that mastering the backend operations was one of the basic prerequisites of being a successful restaurateur until he started managing a new outlet that opened in Model Town completely on his own.

“I set the standards of the dishes that are served at my restaurant. I cook myself. I am a chef and an author of four award-winning books. Hence, I do not serve anything unless I am myself happy with its standard.”

In the last decade of the last century, it became apparent that the brand was losing its hold in the market. With so many restaurants cropping up, providing the same authentic cuisine, somehow Moti Manhal as a brand started to get lost in the concrete jungle of the restaurants. This was when Monish realized about the human nature, “when you do an innovation in a particular area, people accept it, people relate to it, but after a few days people tend to forget it”, he said.

Monish realized that unless a drastic step was taken, keeping Moti Mahal stay afloat in the ocean of new restaurants can be rather difficult. Considering the predicament of the situation, when India was experiencing the retail boom back in 2003-2004, he started a restaurant chain under the parent brand, Moti Mahal Tandoori Trails.

To scale the business at a speed, Monish decided to go ahead with Franchising and also started experimenting with the menu items. The brand started to give the authentic items an international touch. For instance, broccoli, baby corn, sprouts, lobsters which were not used earlier were included in the menu. They even changed the look of the restaurant by bringing in the concept of open seatings and started experimenting with the presentation and brought in a contemporary touch to their dishes and the outlets.

How the Brand Ventured into Franchising

The brand’s franchising journey began in Faridabad, back in 2003. And thereafter immediately, in DLF in 2004. As these outlets became a success, a number of people started approaching for franchising. And since franchising seemed the only way to grow Monish readily gave in.

However, Monish knew about the problems that tagged along with franchising. One of the major problems of franchising is maintaining consistency across all the outlets. “Franchising is a very dangerous domain. There was also the issue of granting the brand to someone who might not do justice to the brand name that has been established for so long.” As a solution to the problem, Monish created a very comprehensive and a well-designed system. “Although we were franchising, we had our own share, our own account manager, and our own people involved in the running of the franchise restaurants. We even had our own quality and audit checker, and at times, the staff as well,” Monish said. This ensured that all the franchisee outlets abided by the set standards of the brand and did justice to the historic brand name.

The Expansion of Moti Mahal

Slowly and steadily the brand started expanding beyond Delhi, to Mumbai, Nariman Point, Punjab, and Ludhiana. When Monish started looking at the two or three-tier cities, he did a little bit of an experiment. They focused not only on the north-west frontier cuisine or the Indian Mughlai cuisine but introduced multicuisine restaurants offering continental, Chinese and the like.  The brand radically adapted to the changes that were happening in the F&B space and was flexible enough to suit to the preferences of the customers.

Reality Check From the Oldest Restaurateurs of the Country

According to Monish, when you are catering to a wide domain of customers, both in India and foreign, simply replicating the business models will not help the business to grow further. You need to re-establish your brand as per the customer preference which keeps changing. And if you are unable to maintain the pace you will without a doubt be left behind.

“When I ventured into the business, the knowledge I extracted from my past experience, especially during the internship that I did under my grandfather and my parents came handy. And I realized that there is no shortcut to success. You’ve got to strive hard and strive longer if you want to make that mark in the F&B space.”

“Presently we are using Posist. And the journey has been great so far. I get detailed reports of all the operations, which helps me to have a complete control over all the outlets.” 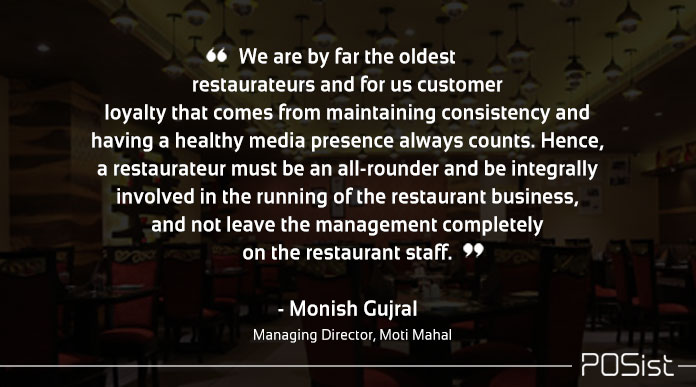 The third generation restaurateur signed off by stating that unless a restaurateur is an all-rounder and has a detailed understanding of the entire restaurant operations, one can hardly hope to have a successful restaurant business. Hence, if you want to make that footprint in this volatile domain of the restaurant industry, you’ve got to strive hard and strive longer!

“Restaurateurs should stand in customers’ shoes to understand the market demands.”...