Punjabis and food have had a long-standing love affair since forever. So, what do you get when you couple the flavors of Punjab, a social foodie phenomenon and sumptuous food together? Barbeque Nation launched a Punjabi Food Festival ‘Jet Set Go’ with an all-new menu, giving the visitors the taste of authentic Punjabi food. The festival offered a magnificent range of delicacies from Punjab and is by far, the largest and the most sumptuous fiesta offered by Barbeque Nation.

Barbeque Nation roped in noted food blogger and social media influencer Gurpreet Singh Tikku aka Mister Tikku as their mascot for the campaign.

Mister Tikku masqueraded as Makkhan Singh and surprised the customers with a dollop of butter that he added to their platter and made them forget every problem. The idea behind Makkan Singh is that there is no problem that good food cannot solve.

The campaign saw massive success in all the cities, with the social and digital media campaigns going viral, and Makkhan Singh himself visiting the Barbeque Nation outlets to talk to and engage with the customers.

Mister Tikku is one of the top food bloggers of the country, having a huge following on social media channels as well as offline. His outgoing nature and love for food made him the perfect choice for the fun and quirky Makkhan Singh and his fun-filled appearance and spot-on comic timing made him an immediate favorite among the masses.

The key to running a successful campaign is spontaneity and customer engagement. While collaborating with food bloggers and influencers and running social media contests are not a new concept in restaurant marketing, Barbeque Nation brought all the elements that make restaurant promotions successful, that resulted in a wildly popular campaign.

Aman Bhatia, Head of Marketing, Barbeque Nation Hospitality Ltd, said, “At Barbeque Nation, we build strong relationships with our patrons through various activities that allow us to engage with them more often. The recently concluded Punjabi Food Festival allowed us to explore innovative forms of engagement, including one through a special mascot, Makkhan Singh that garnered outstanding visibility on digital mediums and at the outlets.”

“We received 6.8 million impressions with a 32% engagement on digital and social mediums, while the promotional video on Makkhan Singh had a viewership of over 2.8 million.”

Social media, offline promotions at the outlets, viral videos, and a popular social media influencer, made the Punjabi Food Festival one of the most successful restaurant promotional campaigns of all time.

Let us drill down into each aspect of the Punjabi Food Festival campaign.

Gurpreet Singh Tikku, better known as Mr. Tikku is a well-loved food blogger and social media influencer, having a massive following both on Facebook and Instagram. His high engagement rate with his followers coupled with the relatable concept of the Punjabi Food Festival gave a new level to micro influencer marketing. Instead of a professional actor, Mister Tikku turned out to be the perfect choice for Makkhan Singh as the audience connects more with a regular person, even if a popular food blogger. The ‘JattSetGo’ contest encouraged customers to seek advice from Makkhan Singh regarding any issues that they may have. Makkhan Singh responded to the fun queries of people with whimsical answers and gave unique ideas to solve their problems which included having delicious food at Barbeque Nation. 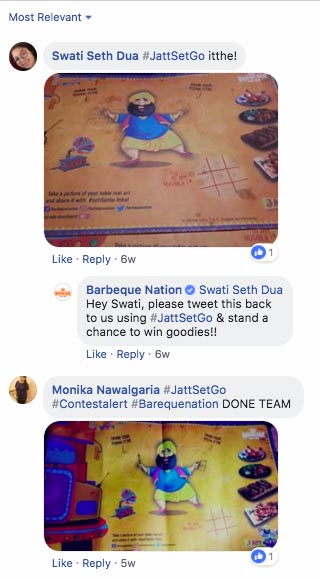 Running contests and campaigns on social media is one of the most tried and tested methods of reaching out to more customers.

Barbeque Nation also ran a contest that asked customers to take a picture of the table mat art and share it on social media along with the hashtag #JattSetGo. The contest garnered widespread promotion with customers tweeting and sharing the picture.

Videos have emerged to be highly engaging medium and perform especially well on social media sites. The promotional videos of the campaign, ‘Makkhan Singh Makkhan Lagake Chala Gaya’ and ‘Makkhan Singh take you on an experiential tour of the most happening Punjabi Food Festival’ garnered over 3 lac views in a short period. The videos are quirky and give the viewers a taste of the experience even before they visit the restaurant.

The Punjabi Food Festival had several layers to the entire campaign. Mister Tikku as Makkhan Singh visited Barbeque Nation outlets and surprised the customers with a casual conversation about the food and engaged with them further by asking them to do the ‘makkhan lagao’ dance step. Activities such as ‘kya aap lassi se much bana sakte hain?’ and asking customers to recite tongue twisters delighted the customers further.

‘When you have an actual person instead of a professional actor, the rawness connects the audience more. – Mister Tikku’

The ‘Jatt Set Go’ campaign turned out to be a huge success. Considering the popularity and audience reception, the duration of the campaign was increased from the initially decided ten days to 17 days.

The concept of Food Festivals offers the brand an effective platform to promote new dishes and trends to the masses through various channels and helps stay relevant and have top of recall. The ambiance and overall dining experience also gave Barbeque Nation a lot of positive word of mouth promotion, resulting in increasing footfall to the restaurant chain.

The Latest Restaurant Industry Trends to Watch Out for in 2021

Restaurant businesses across the world have been adversely affected, due to the novel Coronavirus. As the global pandemic continues to claim thousands of lives,...

4 Proven Strategies For UK Restaurants To Make Their Opening Event...

How India Eats Out? Is A Food Evolution Happening?