Domino’s India, the poster brand of Jubilant Foodworks which solely enjoys over 16% market share is now trying hard to retain its Unicorn status. The stocks have plummeted to under Rs.1000, merely half of what it held in August 2015 and the sudden plunge has led to the valuation of the firm to dip below the $1 Billion mark. With over 1000 stores in India and many more around the corner, Domino’s India is the second-largest market for Domino’s Inc., the leader being The United States. While the number of stores is rising, it is surprising that Jubilant Foodworks has lost over Rs 6,200 Cr. in terms of market value, reaching 6,500 Cr. from its initial value of 12,700 crores.

The emerging competition in the QSR sector, thin margins, and high customer acquisition and retention costs inevitably took a toll on even one of the most formidable brands in the country. Let us take a look at how Domino’s became a favorite among the masses, how the popularity steadily declined, and what the company did to tackle the downfall.

The Initiation of Domino’s

The Rise of Domino’s India

With the fast-food market booming in India in the past decade, Domino’s India has enjoyed its share of profit as well. While the dine-in option flourished, the technological boom did not leave the food sector unscathed. Domino’s Pizza, which was already enjoying its success through its successful marketing campaigns and buy one get one offers, started racing past its competitors even faster. To put this into perspective, Domino’s India was lagging behind McDonald’s India in 2012, but after four years Domino’s has doubled the outlets as compared to the latter and enjoys a 16% market share in the Rs 100 Billion Indian Chained Food Service Industry. Its closest competitor in the pizza market, Pizza Hut India holds a meager 4.4 market share, showing the grave difference between the two.

Domino’s India has stated that it enjoys a database of around 20 million unique customers, showing its hold on the Indian Pizza market. The ’30 minute or free delivery’ has helped the firm build an image of a reliable brand. Connecting with the government, Domino’s had also started pizza delivery to railway passengers in 2015 and in March 2016, Domino’s announced that they would double their railway reach from existing 60 stations to over 130 in the coming months.

The Downfall of Domino’s India

It is always said, the only thing constant is change, and that is what has happened in the last year. The Same Store Sales Growth (SSSG) of Domino’s declined consistently. To put things into perspective, Jubilant Foodworks lost half their valuation and dropped from a peak value of Rs 12,700 crores in mid-2015 to Rs 6,500 crores in mid-2016. The 12 months were hard for the company and shook it from the core. Many vital people resigned from the company in these 12 months, causing internal instability. Harneet Singh Rajpal who held the position of Senior Vice President and Head Marketing in Domino’s India resigned in July 2015, followed by Ravi Gupta, Chief Financial Officer who left in July 2016. But the most significant blow the company witnessed was on 20th September 2016 when Ajay Kaul, the CEO of Jubilant Foodworks resigned after holding the position for 11 long years. The notice not only hurt the company from inside, but the shares tumbled over 3 % on the D-Day while just a fortnight ago on September 6, 2016, the shares of Jubilant Foodworks dropped more than 10%. 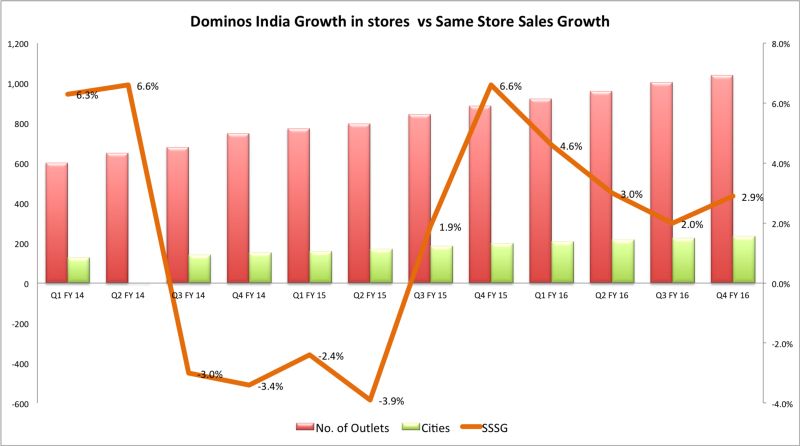 The techno boom that helped Domino’s India increase its already flourishing customer base led to the fall in its profits as well. It is always said, you should move with the times, and this is where Domino’s has been failing to cope up. With the increase in the number of food-related applications and the huge number of new restaurants piling up, the customers received a vast number of cuisines and food types to choose from. The stifling competition in the fast-food industry, with many new Food Startups competing with the attention of the customers, led to the marginal downfall in the Domino’s sales.

The major blow came from the Food Delivery Services which nullified Domino’s major USP: quick and easy food delivery. Suddenly the options to order food from widened, leaving Domino’s far behind in the race.

One other factor that took Domino’s India to a spot of bother was the growth of Pizza Hut. Pizza Hut might not have such a significant customer base in India as Domino’s, but its idea is a lot different than Domino. While Domino’s boasts being a quick-service restaurant, Pizza Hut, on the other hand, offers a casual dining experience combined with the food that everyone loves, Pizza! Pizza Hut is now also offering neck-to-neck competition to Domino’s by releasing BOGO offers and other such discounts.

Domino’s India has suffered a lot from the growth of local and international brands as well such as Burger King, Sbarro Pizza, Smokey’s BBQ & Grill, and Insta Pizza. With the increase of food brands everywhere and many more foreign restaurant chains setting foot in India, not only Domino’s but giants such as McDonald’s and KFC have suffered losses as well.

The entire QSR industry has seen a loss, not because of low demand, but because of the sheer size of the supply.

With the increase in prices all around, Domino’s India saw a depression in the quality. The decrease in quality wasn’t well-received by customers, and many people shifted to other joints to fulfill their pizza needs. Domino’s even tried to innovate and has brought many new lines of pizzas, including the Chef’s Wonder pizzas which failed miserably, thus pushing Domino’s further into the abyss. The addition of Burger Pizza was not able to impress the customers, thus keeping Domino’s still off-track.

Adding to the despair of Domino’s, on May 23, 2016, The Centre for Science and Environment (CSE) posted results of a research conducted by them. The study conducted tests on the products of 38 fast-food brands in Delhi which sell ready-to-eat bread. It was found that almost 84% of the brands including Domino’s and Subway sell bread which contains potassium bromate and potassium iodate, components banned in many countries as they may cause cancer. The results did not bring any joy to the shareholders, and the prices of Domino’s shares dropped to a three-month low. Attempts were made to deny usage of any such components by both Jubilant and McDonald’s but the damage had already been done. Domino’s has always been a favorite among the Indian foodies, especially the youth. A birthday party, an office celebration or a simple get together, people have celebrated with Domino’s. A cheesy pizza or stuffed garlic bread has always been the life of the party. But in the current scenario, when the Indian Food Sector is blooming and is currently valued at Rs 300 Billion and will almost touch the Rs 500 Billion mark in the next five years, it is really unfortunate to witness that the market leader has to struggle to stay on course.

In August 2017, Domino’s India decided to go for the much-needed product improvement and strategy change. According to the Jubilant Woodworks’s press release, the improvement to its pizzas includes a new soft and tasty crust, more and bigger toppings, more cheese and a new heavier tomato sauce made from imported Californian tomatoes.

Mr. Pratik Pota, CEO, Jubilant FoodWorks Limited said, “Earlier in the year, we had unveiled our new strategy for driving sustainable, profitable growth.” The key pillars of these were Product Improvement, Value For Money, Seamless Customer Experience and Superior Technology all enabled by a focus on cutting costs and driving efficiencies.

This was supported by a 360-degree marketing campaign that included Television, Digital, Press, and Radio. They also sport a new look and come in blue and white packaging that highlights the changes.

As a part of Cost Cutting strategy that aimed to improve margins and increase efficiency, earlier this year, Domino’s also undertook manpower optimization exercise, discontinued their popular ‘Buy One Get One’ offer, reduced the number of staff per outlet from 25 to 22, and closed some of their outlets. Domino’s also announced that they will go slow with their expansion, and are only looking to open 40-50 stores in the current financial year, which is significantly less than the average of 100 new stores on an average per year.

With over 1000 outlets in India and every outlet offers the same tasty pizzas that everyone loves, Dominos has shown everyone that standardization of taste and quality is very well achievable no matter how big the enterprise is. With over 1000 stores in just over 20 years and the goal of 1000 more in another 5, Domino’s India has shown what it looks like to be successful.

The new and improved pizza has indeed struck the right chords with the customers, and hopefully will re-establish Domino’s India as the ultimate pizza brand in the country.

The Unsung Heroes Of Your Restaurant: The Restaurant Staff