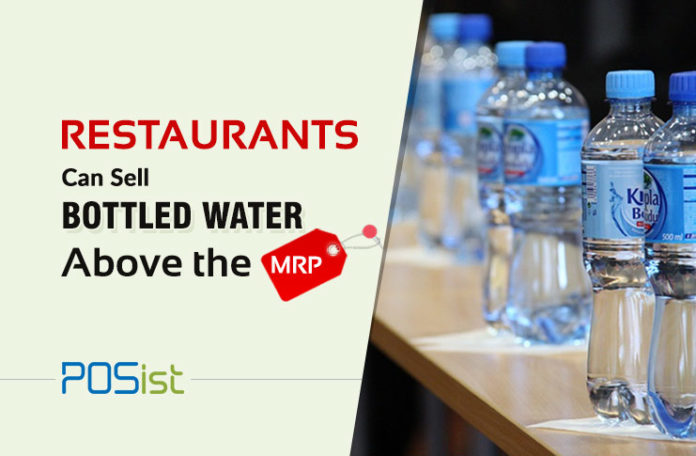 After much apprehension regarding the sale of packaged mineral water above the MRP at restaurants, hotels, multiplexes, etc, the Supreme Court gave the ruling that restaurants are not bound by the MRP.

Earlier, the government had said that selling mineral water above the MRP at restaurants, hotels, multiplexes etc would attract a monetary fine, and may also result in a jail term for the restaurant owners and the management. The government told the Supreme Court that charging a higher price than the MRP of the packaged drinking water is not only against the consumer interest but also leads to tax evasion.

Restaurants Not Bound by the MRP

A bench led by Justice Rohinton F Nariman declared that the provisions of the Legal Metrology Act, are not applicable to restaurants selling packaged water in restaurants and hotels.

Section 36 of the Legal Metrology Act states that anyone caught selling, distributing or delivering any pre-packaged commodity that does not conform to the declarations on the package shall be punished with up to Rs 25,000 fine, for the first offence. The fine can go up to Rs 50,000 for the second offence, and up to Rs 1 lakh or a jail term of one year or both for a subsequent offence.

The Ministry of Consumer Affairs had submitted an affidavit in response to a petition submitted by the Federation of Hotel and Restaurant Associations of India (FHRAI) against a Delhi High Court Ruling. The Ruling stated that overcharging for pre-packaged or pre-packed items such as the mineral water is an offence under the Legal Metrology Act.

The government had earlier said, ‘Sale of packaged water over the MRP by hotels and restaurants may have implication regarding tax evasion as a bottle purchased by a hotel at cost price, which should be sold at MRP or less, is being sold at much higher prices, leading to a possible loss of additional revenue to the government in the form of service tax or excise duty etc.’

The Supreme Court ruled that the service is also provided in restaurants, where customers go to enjoy the ambience and the customer service. “It is not a case of simple sale. Nobody goes to a hotel to buy or take away a bottle of mineral water.”

The news comes as a relief for restaurant owners since a majority of restaurants charge a higher price than the MRP.

When Rahul was in the UK for his MBA, he had tasted one of his kinds of milkshakes and was keen to replicate the...

Opening A Restaurant In London? Here’s What You Need To Know