Delhi Health Minister Satyendra Jain recently gave a statement that hookah smoking is not allowed in non-smoking zones as per Section 4 of COTPA (Cigarette and other Tobacco Products Act) as well as in the smoking zones. As a result of the Hookah ban, the Delhi Government has asked the police and Municipal corporations to cancel the licenses of all the restaurants and bars where hookah smoking is allowed.  Earlier this year, the government had issued a statement that Hookah smoking would not be allowed in the dining areas of restaurants, it was still, however, permissible in the Smoking Zones of the restaurant.

Complete Hookah Ban in the Smoking Zones of Restaurants

The Minister has immediately urged the police to cancel the licenses of restaurants and other eateries where Hookah smoking is allowed as it is completely illegal. In a recent notification of the Indian Government, from Ministry of Health and Family Welfare dated May 23, 2017, completely prohibits the use of hookah in the smoking zones also. The government remarked in the statement that as per the Centre for Disease Control and Prevention (CDC), an hour-long hookah session comprises 200 puffs as compared to 30 puffs in a cigarette. The statement also mentioned about the increasing numbers of hookah bars in the city.

The Delhi Government also stated that the tobacco control cell has conducted several raids in various parts of the city where chemical analysis of picked up samples showed a presence of nicotine in almost all the samples though they originally affirmed to be herbal in nature. The government alleged that though they had sent several letters to Delhi Police and civic bodies in last four years, no action was initiated against these illegally running hookah bars to save the residents of Delhi mainly youngsters from harmful effects of tobacco.

The statement said that the violations are still happening in many parts of Delhi and no action has been taken.  It was mentioned in the statement that hookah smoking is widespread in a number of restaurants, eateries in the metropolitan cities including Delhi and has become the popular norm in the Restaurant Space.

The Delhi Government said that unlike in earlier times where hookah was mostly used by the village elders, it has now gained popularity among the youth. People consider hookah as a safe alternative to smoking without realizing that it is even more harmful and has an adverse impact on their health.

Impact of Hookah Ban on the Restaurant Industry 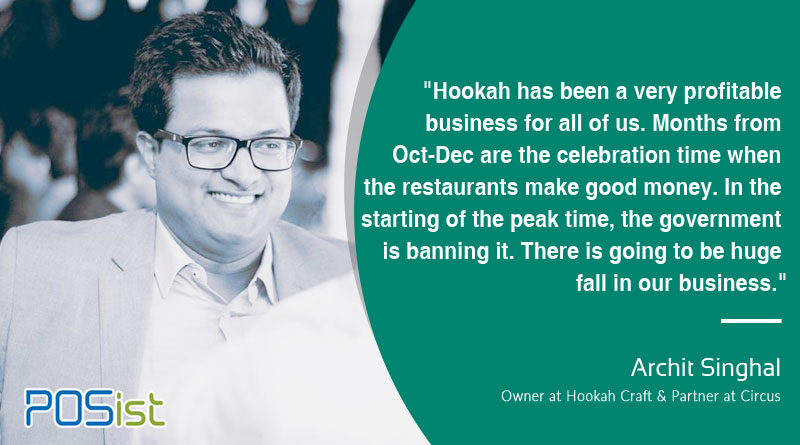 It has become very difficult to run the restaurant industry with a series of ban and increase in taxes that have been happening recently. A number of restaurants have high Hookah sales and primarily run their business on this. The announcement of Hookah ban met with an outcry among the restaurateurs that were serving Shisha at their restaurants and lounges.

“We are planning to go to National Restaurant Association regarding this hookah ban. We are also trying to raise money from the restaurant community to hire a lawyer and approach the court for a stay order or a middle ground because the government is not addressing our concerns.”

There are several Hookah parlours and suppliers which will go out of business due to the recent Hookah ban in Delhi.