The beginning of October marked the start of the auspicious festival of Navratri, the ten days and nine nights long festival. It is believed one should stop consuming onion, garlic, and common salt, if not fasting during the period. While everyone was gearing up to worship goddess Durga, Domino’s India went a step further and stated that more than half of its outlets would turn entirely vegetarian for this festival period to please the customers observing the Navratri rituals, and hence introduced Domino’s Navratri Special.

Domino’s Navratri Special is all Vegetarian

Starting from October 1, almost 500 Domino’s outlets in northern, central and parts of western India including states such as Gujarat, Madhya Pradesh, Chhattisgarh, Uttar Pradesh, and Bihar have been serving only vegetarian items in their menu. It is being believed that Domino’s has made this unique move to boost its customer base and overcome the loss of growth it has incurred in the same store growth rate in the last year. Almost all food outlets see a loss of sales during the Navratri period, due to lesser people consuming non-veg and foods with onion or garlic in them.

Domino’s India has brought Domino’s Navratri special vegetarian menu only offers in the past, but it was limited to a few stores only without an option for delivery. But this time, Domino’s has decided to take it a step further. Apart from going all vegetarian in almost 500 outlets, Domino’s has included Domino’s Navratri special items on the menu, which includes pizza bases made from Singhara Atta (Water Chestnut Flour), sabudana crispies, and cheese & sauces prepared using rock salt while making sure there is no usage of Garlic and Onion in these special pizzas.

While this decision has been applauded by many, the non-veg consumer base has been deeply disappointed. Going all vegetarian in a country which constitutes of only around 30% vegetarians, Domino’s might have lost more than it hopes to gain. With no option to order non-vegetarian pizzas online or offline, many people are feeling dejected.

One such customer had a disappointing experience with Domino’s while trying to order Non-vegetarian pizza during the Navratri. He took to social media to share his grievance and also posted the screenshots of his conversation with the Domino’s customer support executive. He also went on to rant and question this move of Domino’s as border-line non-secular behavior. You can view the original post here. 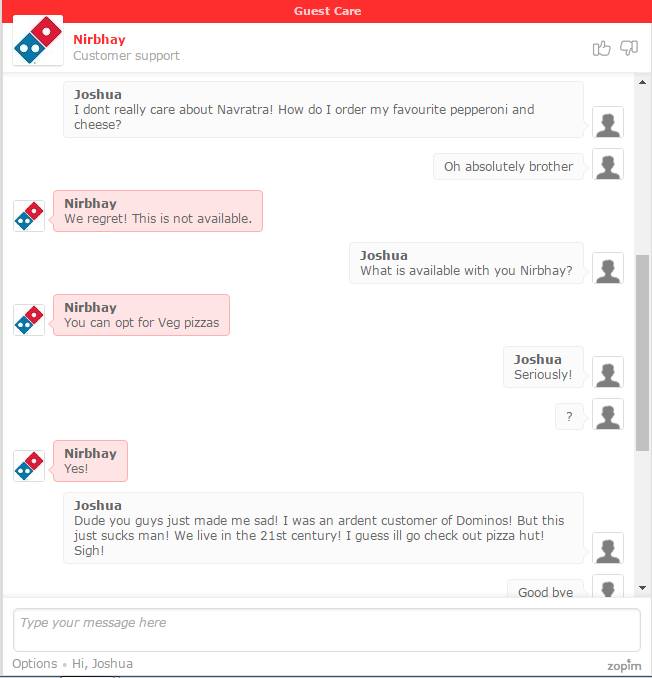 While Domino’s has shown appreciation to value the sentiments of a group, their decision to neglect the whole faction that likes to enjoy their non-vegetarian pizza range is not appropriate. Additionally, the same will remain for the entire nine days of Navratri, thus creating a long wait for the customers to enjoy their share of non-vegetarian food. While Domino’s is amending its ways to serve the vegetarian crowd, its competitors like Pizza Hut, Sbarro Pizza, Slice of Italy might get away with the non-vegetarian consumers. While hurting someone’s devotion is not fitting, denying people what they want to eat might not be a smart decision as well. When the dust settles, we will get to know, if Domino’s has lost more than it hoped to gain from the auspicious days.

Tips To Increase Efficiency With A Commercial Restaurant Kitchen Layout

What Is A Barback? Job Role and Responsibilities, Explained

5 Things To Consider Before Going For Restaurant Consulting

Small Restaurant Menu Or Big: Who Takes The Win

7 Hacks To Market Your Restaurant To Millennials