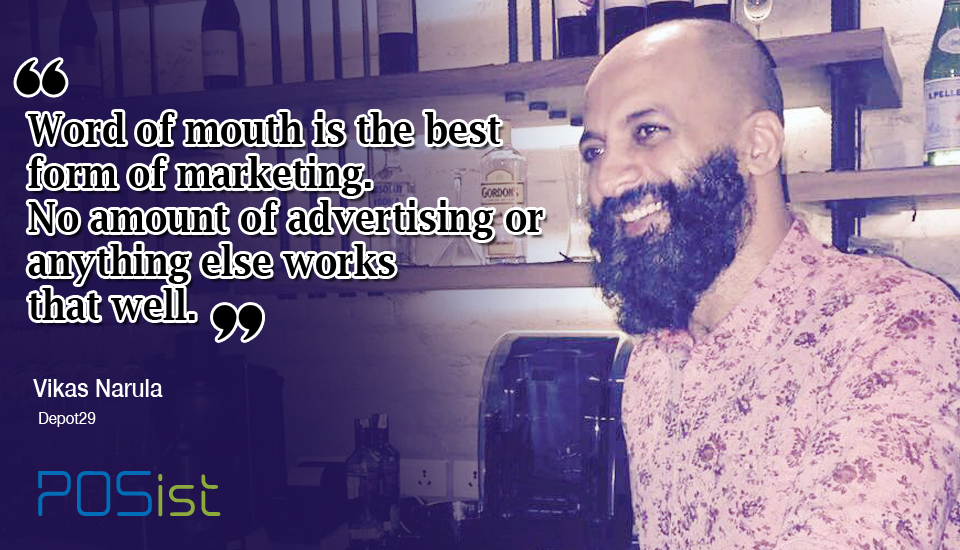 When the minds of a top chef, an engineer and a movie producer come together, the likes of Depot29 is the product. A restaurant prodigy of Chef Ritu Dalmia, Vikas Narula, and GirjashankerVohra, Depot29 features the fusion of original music performances and contemporary cuisine. With mouth-watering waffles and the crispiest chicken burger, this restaurant has been turning quite a few heads in South Delhi.

In Conversation with Vikas Narula of Depot29

Following the success of Depot29 which is running well in Safdarjung Enclave (110029), the trio has added another member to the Depot Family, Depot48. The restaurant is located at Greater Kailash 1 (110048), thus giving the name Depot48. Depot48 opened in August 2016 and is already making the news.

We had the chance to have a candid chat with Vikas Narula about his journey as a restaurateur.

On being questioned about the challenges of opening a restaurant business, Vikas humbly gave the credit to Chef Ritu Dalmia. “We were very lucky that Ritu Dalmia was our partner in Depot29, and she mentored and guided us through the steps that we should have taken,” said Vikas. “I am sure it is a lot tougher for people who lack any contacts in the industry. There are a lot of challenges faced by restaurateurs while running a restaurant which is not mentioned on the paper, such as chasing the vendors and setting up the kitchen, or getting your lease agreements registered.”

Depot29 has seen a lot of success in its not so long life and it is expected that Depot48 will take the legacy forward. While Depot29 is a one of a kind restaurant, Depot48 has learned from its older sister restaurant and made some amendments. Bigger tables add comfort and the bigger bar with high chairs give off a cool pub feel to its inhabitants. With the second outlet, Vikas Narula has expressed that while maintaining consistency they try to emulate the DIVA standards of food, referring to the restaurant of their Chef-partner Ritu Dalmia.

While talking about the restaurant costs and inventory management, Vikas mentioned the need for a good POS software. “We use a software called Posist to manage our food costs and inventory.” He said with a grin. “Food cost is the biggest cost that a restaurant faces apart from your real estate and the staff salaries but your food cost is the variable while the rest of it is largely fixed. With a good POS software, you can manage the costs and track the costs of buying and selling a commodity and control the inventory to remove thefts.”

On being asked about restaurant marketing, Vikas tells us that he has just started socializing on platforms like Instagram to market his restaurant, that too after repeated reminders from people. “Word of mouth is the best form of marketing and no amount of advertising or anything else works that way”, he states.

While there are a lot of review websites where users in large number review restaurants, Vikas is not a big fan of the concept, because of the increasing number of fake reviews.

“I am thinking of starting a blog called Tomato where I am going to call out people who review or unnecessarily trying to malign and write fake reviews.  We have had a couple of instances at Depot48 where people posted spam reviews and ratings. The 1-star ratings that we get, I don’t like to call them out as sometimes I think ignorance is bliss so you just let it be. It’s better to apologize, and not stoop to their level as ultimately your customers make and break your restaurant and there is no point in causing a stir.” said Vikas.