Home Foodpreneurs Shakir Haq, Spills The Beans On How Hotel Empire Has Been Delivering... 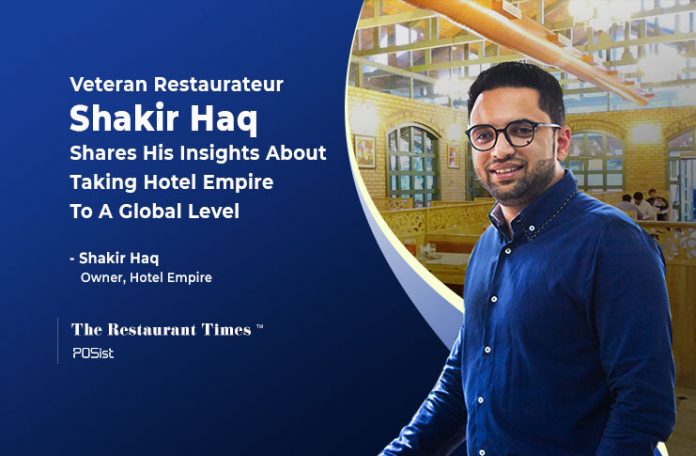 Shakir Haq is the CEO of Empire Group of Restaurants with a demonstrated history of working in the hospitality industry. It has been an exciting journey for him so far, tackling major challenges every day and interacting with different types of customers on a daily basis.

The Empire Restaurant was started back in 1966, by Mr. Abdul Rahim Haji and now it is carried on by their third generation. It is a unique place, where every creation and every element has its own meaning because they contribute to creating a journey, to discover the gastronomic culture of a country. The Empire Restaurant has been in the industry for five decades now. It is among the leading chains of restaurants in Bangalore. It has 31 outlets across Bangalore and Mysore.  It is popular for serving regular food to the customers which they can have on a daily basis.

In Conversation With Shakir Haq Of The Hotel Empire

In an exclusive conversation with The Restaurant Times, Shakir Haq talks of his journey in the industry, the story behind Hotel Empire, challenges in running the business, reasons behind restaurant failure and a lot more.

Haq says that after the 2001 IT boom the restaurant industry started expanding. Hotel Empire started growing in 2002. With the expansion, came the challenges. With 31 operating outlets and changing tastes and preferences of the consumers, maintaining consistency becomes paramount. Customers value the uniform experience that chains offer. The taste of the food is what keeps the customers coming back to your restaurant business.

At the Empire Hotel, they have a central kitchen that operates through step by step Standard Operating Procedures (SOPs) generated and they have semi-cooked food at all their outlets which helps in maintaining uniformity throughout.

While the restaurant industry in India is booming, it is always a question of longevity and survival. Even if your restaurant kicks off with a great start, chances are that new competitors may enter the market and blemish the game for you by stealing your clients. According to Haq, the competition was a major challenge. With new competitors coming in, it is essential to have a unique selling proposition that separates you from your competition, in order to survive in the business.

Business in Bangalore was growing day by day. There were a lot of late-night workers at that time who did not have access to restaurants late at odd hours. It is at that time when the Hotel Empire started gaining popularity as they served food late at night to the regular workers.

“We had our strategies well in place and we analyzed the market according to the location. We were in the right place at the right time. This was possible due to the strong team, good logistics setup, and supply chain,” says Haq.

Hotel Empire has always tried to stay ahead of the competition in the market. It was possible because of the quality of the food served and the use of technology.

Haq says that back in 2007 only MNCs like Pizza Hut had their own call centers but Hotel Empire had its own call center back then. With computerized billing, the POS system, mobile ordering system coming in, technology has played a major role in the Hotel Empire’s operations.

They keep updating the systems as and when required. They have mobile apps, web apps, internal apps for maintenance of the restaurant designed by following SOPs.

Hotel Empire has its own ERP system to manage logistics, supply chain and get admin management reports. The use of technology has helped them immensely to reduce manual work. It has played a major role in the day to day operations of the restaurant.  It has created an efficient and convenient working environment for the employees. It has helped to reduce the turnover time for serving the customers, ultimately making them happy.

Hotel Empire is a chain of restaurants that has about twenty-five to thirty-thousand people visiting them per day. It is a big task for them to ensure satisfaction so that the customers keep coming back.

According to Haq, it is important to prioritize the quality of the food so that customers have the same experience throughout all outlets. At The Empire, they have a comfort food menu priced at an affordable rate. They also have a grievance department that ensures that all customers walk out happily out of their outlet and if they have any suggestions or discrepancies, they can contact the grievance department. Every restaurant has its ups and downs, Hotel Empire makes sure to give a prompt response to all feedback and suggestions positively.

Apart from delivering a quick response to the customers, Hotel Empire uses the best ingredients available in the market and serves freshly prepared food every day. The USP of Empire is keeping it natural and using minimal or close to zero synthetic substances in the food.

‘The pillars of Empire’s success consist of the trust gained from the customers and the passion from our team’s side,’ says Haq.

Strategy Behind The Exponential Growth Of The Hotel Empire

Bangalore is known for its outward culture. Hotel Empire felt the need for good food. It took a while for them to understand the city and the demographics. The ultimate goal of the Hotel Empire was to expand across the city so that it is easily accessible for the patrons.

The strategy behind their exponential growth was intense research and development about the population. It included research on these factors: ‘Where the population is migrating?’ , ‘What category/age of people are migrating?’ etc. The R&D would ultimately help them to open new outlets, according to the demographics of each area.

Apart from R&D, one of the strong pillars of the Hotel Empire was its customers. The customers have always believed in their brand and helped them to create a better brand value.

‘The customers know that we are here to stay. We are getting better day by day. We provide a guaranteed level of hygiene and sanitation, also, value for money and that is why customers trust us,’ says Haq.

According to Haq, the secret sauce behind success is being disciplined and consistent and not compromising on ethics and morals. The consistency comes from the quality of ingredients used as they never compromise on the taste. The culture followed at the Hotel Empire treats everyone as members of one family which gives the members a sense of equality and belongingness.

Hotel Empire constantly thrives to reinvent and update its procedures and practices. They try to incorporate the upcoming technology in the market. With machine learning, artificial intelligence, IoT, Hotel Empire is trying to work on analyzing how much food to prepare for the next day and set up protocols in order to minimize wastage and be more efficient.

Haq says that they are focussing on making Hotel Empire, a semi automized production center, a center of excellence, where products will be rolling out of the kitchen with better shelf life and retainment of 100% nutrition value.

With the digital age, India is moving towards a convenience food range. In today’s generation, people don’t even have the time to cook for themselves. In order to bridge the gap, Hotel Empire plans to bring in ‘Do It Yourself Kits’, wherein ready to cook and ready to eat products will be provided to the customers to make it simpler for them to cook for themselves.

Haq visions Hotel Empire to be a global food company, where their signature dishes would be present in every kitchen. Their aim would be to help other beginners in the restaurant industry and take the company to a global level.