Home Foodpreneurs “You need to constantly innovate the menu to keep the customers hitched”... As per a report from NRAI, Annual sales in the restaurant industry are $783 billion and Annual food and beverage purchase are projected to be at $279 billion. Considering the huge potential that this sector stores we have tried to unveil the various layers that have made the food industry what it is today. In a candid conversation with Rahul Bhatia of PHR Consultants, we uncovered how the food and beverage industry is evolving and at different speeds across the states.

In Conversation with Rahul Bhatia of PHR Consultants

PHR Consultants is a notable name in the F&B industry domain with customers throughout the country. They work will all restaurant formats, from fine dine to coffee shops, specialty restaurants to multi cuisines. PHR Consultants work closely with the restaurant owners to find the perfect location, employ chef consultants to design the menu, and also have the HR to source the best staff for a restaurant. They also help the restaurant acquire the licenses and get the legal work done.

Is the industry evolving at the same speed in all the states in India?

We broached the conversation with the significant growth of the food and beverage sector in the last few years.Mr. Bhatia stated that although all the states have witnessed the evolution, the extent of the speed of the evolution differs from state to state. For instance, he stated that liquor is banned in Gujarat and even non-veg does not work well in the state, while it is evident that these two component brings in the most sales in all restaurants. While restaurants in other states experience nearly 60% of their sales in liquor and just 40% from food when it comes to Gujarat almost 90% of the sales come from food items and the remaining 10% from other beverages. Hence, innovations in food items become a basic prerequisite for restaurants in Gujarat to blossom. In such states, he stated, the restaurant owners need to keep adding something interesting to the menu to keep the customers hitched to their restaurants.  Thus, incurring profits in a state like Gujarat becomes a little difficult as compared to the other states. 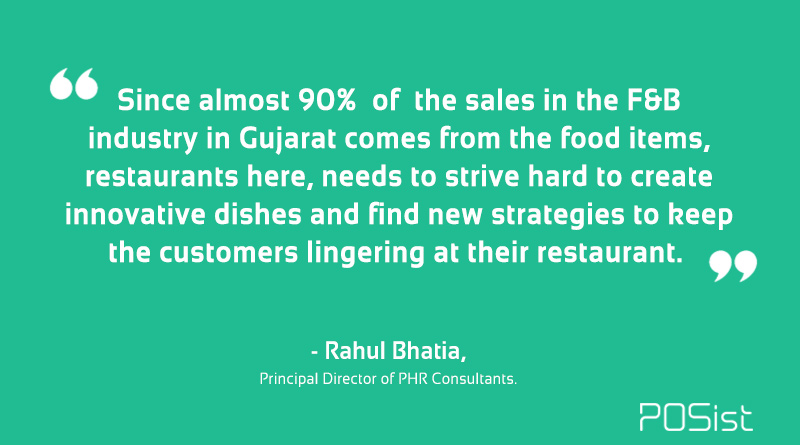 Popular Restaurant Formats Across the Country

Mr Bhatia stated thatwhile QSR has come across to be the most favoured format, both for the restaurant owners and the customers, other formats like food trucks, food carts and cloud kitchen has seen new heights in 2017 all over the country. In 2018, we would witness an increasing demand for QSR, and along with this, there will be the encroachment of thematic restaurants. In the states like Maharashtra and Karnataka where the major targeted clientele are the youngsters, pubs & bars, casual dining is expected to continue to be the favourites. On the other hand, in states like Gujarat where liquor is banned and where the major targeted audience are the families multi-cuisine restaurants are expected to do wonders since a multi-cuisine restaurant is expected to quench the demands of all the members of the family.

Mr Bhatia stated that the targeted clientele differs from format to format. For example, a QSR, a food truck, a coffee shop will target the school, college, and university crowds. On the other hand, a fine dine will target the ones who are aged above 35 years. However, generally with the vibrant young population, the main target of restaurants in India is evidently the youngsters. These are those who are much more travelled, much more aware, and are open to experimentation and are ready to explore the market when it comes to food and drinks. We also cannot ignore the fact the targeted clientele also differs from state to state as already mentioned in the previous paragraph.

Finding investments and franchising, is it difficult?

Hearing this question, Mr. Bhatia stated that, in today’s time, it is not difficult for restaurant owners to find investment for their restaurants. And this is true for most of the states. Be it Maharastra where you will mostly find the corporate business or a state like Gujarat where you will mostly find crystal or diamond business. For some, investing in a restaurant is a business venture, while for others it is a feather attached to their status symbol. Mr Bhatia stated that while franchising seems a very lucrative way to scale across the geography, most restaurant owners falter after running it a couple of years. This is majorly because running a restaurant is different from running a franchise. Both require different skills and different mindset which most people fails to understand.

On having this casual conversation with Rahul Bhatia of PHR Consultants, it has become more than clear the even states within India shows different levels of evolution when it comes to the F&B industry. This is because different states have a different mindset and different traditions, and the industries of each state immensely depend on the local behaviour.

9 Proven Strategies For Food Truck Business Promotion Plan In The...

The idea of food trucks is gaining traction worldwide. The UAE too has seen tremendous growth in the number of businesses operating food trucks....

How UAE Restaurants Can Achieve Their Growth Goals By Investing In...