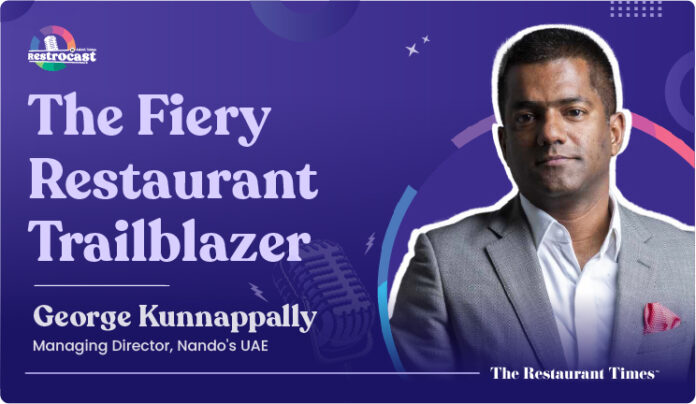 If the success of Nando’s in UAE were to be associated with one person, it would undoubtedly be its managing director, George Kunnappally. He might not have built the establishment from scratch, but it is because of his entrepreneurial mindset, relationship with his employees, self-awareness, and sheer hard work that made Nando’s an established business in UAE.

His journey as a science student from Thiruvananthapuram to become financially independent, to enrolling in a hotel management course in Bangalore — this shift from a science major to the hospitality industry was purely accidental in Kunnappally’s life. It was during a trip to a hotel with his father when he was completely enamored by the hospital industry. The discipline, glamor, the tastefulness of the hotels, and how everyone was on a mission to provide the best service are what intrigued and attracted him in the first place.

Interested in knowing more about George Kunnappally’s journey to becoming a managing director at one of the most successful food establishments in the UAE? Let’s dig deep!

In Conversation With George Kunnappally, Managing Director of Nando’s UAE

This episode on F&B talks with George Kunnappally about his journey in making Nando’s a successful food chain in the UAE, the mindset he developed, the lack of entrepreneurial knack, and the change in the hospitality industry over the years. He also discusses how being self-aware was a key contributor to his success.

Connection Between Self-Awareness and Success

Although the hospitality industry intrigued Kunnappally, it was very early on in his career that he realized that hotel was not his calling. And no, it wasn’t the excruciatingly long hours or the locations that were the issue, but this had more to do with his growth in the industry.

“The time from being a supervisory trainee to being the general manager of the property, in an ideal world, would be about 10 to 15 years. And I was like, I don’t have that much time,” he says.

This sense of time was important to him because he was always interested in the amount of time it would take him to complete a task.

Additionally, during his initial days, he got to work with line managers that were extremely generous, and benevolent, and who made things easy for him by sharing their knowledge and experience. He further says, “What took them five years to learn? They tried to impart that to me or transfer that knowledge to me in five months or two years. And I’ve been fortunate that way.”

It was also an opportunity that his brother let go of, which led him to take up the offer and arrive in Dubai. These are some minor things that piled on, which makes Kunnappally describe his journey in the hospitality sector as serendipitous. “I knew nothing about Dubai other than the fact that a lot of people are doing well here, and the quality of life is good, and it is safe,” he says.

Having an Owner’s Mindset

Although Kunnappally holds a key executive position and is a major reason behind Nando’s success in UAE, he is also quite aware that he was not cut out to be an entrepreneur. According to him, he cannot build a team from scratch, invest resources and take risks. This is probably why he has huge respect for entrepreneurs all around.

He believes that entrepreneurs are in it because they’re passionate and that they are creators of solutions, creators of projects, and creators of wealth. It is because of them that people like Kunnappally – salaried career professionals are more risk-averse and have better opportunities to achieve their vision.

Kunnappally has majorly worked with small businesses where he had to directly report to the owner, which led to them becoming a family over time. This is why even though he himself is not an owner, he does have an owner’s mindset and it is the same quality he looks out for when hiring members for his team.

He further went on to give an example of decision-making to elaborate on his owner’s mindset. Whenever he is making a big decision that has a monetary impact, and the data is not crystal clear, he looks at it from an owner’s view — that if this is my business, what would the decision be?

That gives him a level of clarity that he didn’t have otherwise, and once he has made that decision, his conscience is clear in the sense that whatever way that decision goes, it was he who took the call.

“With the owner’s mindset, I didn’t take this call as a salaried resource, thinking it was already 6:00 clock. I got to rush,” he says.

Being an Equal Opportunity Employer

Kunnappally believes that a major test of being a leader in an organization has the ability to identify the closers. Closers are those employees in an organization who, when given a task, will get it done, come what may. These closers might not always hold executive positions in the organization, but they are as important to the business as your senior leadership or restaurant-level leadership.

He further adds that making a difference or transforming is another major test of leadership than actually achieving sales targets and bottom lines.

Speaking about employees in his organization, Kunnappally also mentioned how he is a committed feminist and believes in equal opportunities for both genders. Although his notion of feminism doesn’t just end with equal rights, he strongly believes that it only completes a full circle when people acknowledge that women can be equally or even more competent than men.

“And the fact and from experience, I can see in many fields they are far more competent than men. It does justify,” he says.

Nando’s was previously heavily dominated by men, but by making a conscious effort, today, nine of their almost twenty restaurants are managed by women. They run some of the busiest Nando establishments and hold key positions in the organization.

Relationship Between Operators and Delivery Aggregators

Food aggregators are a crucial aspect of the hospitality industry. According to Kunnappally, his stance on aggregators has always been consistent, however bitter-sweet it might sound. He says that the aggregators cannot be entirely blamed if the customers want to use them and that many brands are on aggregators because they are unable to generate enough traffic on their own platforms.

In fact, Nando’s had plans of developing their own mobile app to generate bulk orders, but taking UAE’s lifestyle into account, they knew that it would be a difficult feat to accomplish because of the presence of Zomato, Deliveroo, and Talabat.

As Nando’s managing director, George Kunnappally, leads a team of nine direct reports and 450 employees spread across 19 restaurants, the Nando’s call center, and central support. Along with that, Kunnappally is also on the advisory board of the Dubai Restaurants Group, Global Restaurant Investment Forum, Middle East Food Forum, and Arabian & African Hospitality Investment Conference. He not only advocates for issues that are important to Nando’s, but to the industry as a whole.

Interview with Shivang Gupta of 2 Bandits and The Sky High

How To Choose The Best Restaurant POS For Your Food Business

A Complete Guide On How To Open A Food Truck Business...