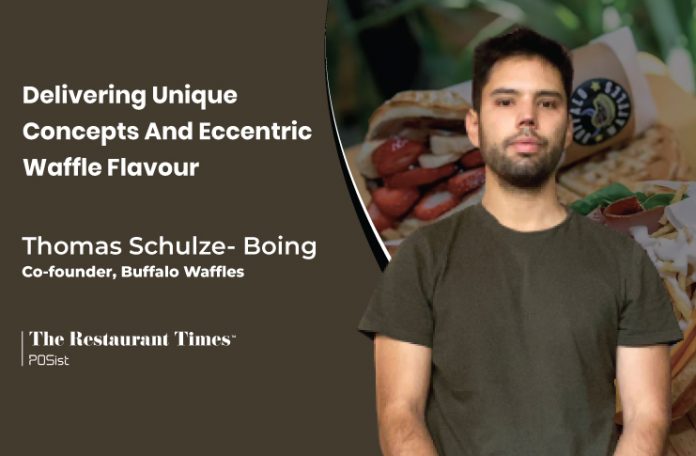 Buffalo Waffles is a unique street-style waffle chain that serves waffles with meat, ice cream, and desserts. And the finger-licking goods are certainly a hit among youngsters. Thomas,  a young entrepreneur from Chile, after finishing his major in organizational Psychology started his career in the city. Early in his career, he co-founded Maid Your House (a cleaning startup that failed after 2 years) and simultaneously Buffalo Waffles.

Today Buffalo Waffles is one emerging success story from Chile. Thomas enjoys building organizations, creating structures and cultures. He is a big fan of the Teal organization model. The concept of Buffalo Waffles came into existence when Thomas went on a trip to the neighboring country Argentina. It was in Argentina he saw a concept of savory waffles which he felt was a good concept but poorly executed.

A few years later Stephan (Co-founder Buffalo Waffles) asked Thomas to create a company with the little savings of 4000$ they had and they went ahead with it. Thomas started searching for a venue. Thomas found the perfect venue. Stephan negotiated well, and there began the journey of the Buffalo Waffles.

In an exclusive conversation with The Restaurant Times, Thomas Schulze-Boing, Co-founder of Buffalo Waffles, discusses how the brand has evolved with time and how they bolstered their overall sales in the pandemic with the help of food delivery apps.

TRT: Tell us how the idea of starting Buffalo Waffles came to you and your team and how were the early days for you?

Thomas: So, from the beginning, it was made with a lot of love from the founding co-partners. We did everything; we painted the store and also the original concept is like cool and simple, affordable food that looks great. So we’re trying to maintain that. The innovation was done by founding partners with little upfront investment.

Product is king, we got lucky with the first items. The original menu is still the same and we devoted ourselves to improving it, only rarely adding (new) items. The first 8 items haven’t changed at all. We have made very few changes to the original offering. The first classical waffles are like the real classics.

Maintaining the ethos of the brand;  doing things right and keeping things simple;  not being pretentious about it; just being cool with a low profile and doing things right; We are trying to maintain these ethics through the years as we have grown as a company. We also try to implement these values with our franchises as well.  We don’t believe in being bossy or  boasting too much of ourselves We believe in keeping our  head down and keep doing things we master.

TRT- We would like to understand how it was for you to pivot during this time and how you were able to sustain the business during the pandemic?

Thomas- 2020 was a huge blow to the business, and to give you some context: In Chile, we were reeling from this social unrest period of 2-3 months where everything got paralyzed, but we were coming up with sales that plummeted before covid.

Prior to that, we were struggling for 3 months and we were just starting to pick up in March when Covid delivered a huge punch in the face, knocking us out.

But, the thing that saved us from the commercial menace was the delivery apps. The concept of delivering apps has already proven to work so and in our case, it turned out that it worked just as well for delivery as it did with takeaway. The government also stepped in to help us with subsidies and other types of stuff that allowed us to keep our workforce running.

The franchise system, and appetite for risk and capital, plus the real estate opportunity allowed us to open 13 stores in 2020, instead of closing them. We opened 20 more stores that doubled the size of the company, which was a huge win for us.

TRT: What are your thoughts on creating this kind of effective communication with the brand and consumers and how do you do that? Can you share some thoughts on that?

Thomas:  The thing customers value more in a brand is the focus and their authenticity. Hence, we try to do what sounds right for our organization and just use the classical marketing approach, which is like asking the clients what they want.

We try to build from within, listen to our voice, what we want to do as a brand, and how we want the brand to look like to the world, and what is fun for us to create and develop. We believe in the ‘make yourself available’ rule for which we hired someone specifically for dealing with customer care and created more contact channels. Also, our main focus is on risk-taking and gut feeling more than controlling and measuring which makes us stand out of the league.

TRT: What goes behind your recipe innovation? How does your teamwork around it, are you also involved in that?

Thomas: For the first 6 years, only Stefan and I did the recipe innovation, very informally with friends. Later, more colleagues have joined this role.

We did it all at our places, experimenting in our homes, and finally, I bought the first waffle maker. We set up a day for a house party with some friends and everybody pitched in there. Then, we rated them and created the items in the most preferred model of the recipe, So that was during the first 6-7 years and now we have a more conscious and direct approach. However, anyone in the company can take the role and suggest a new menu item now.

It’s a challenge to add new items because of the simplicity of our model and our current (little) storage capacity. For instance, we focused on experimenting and “playing it by the ear” and got our very new vegan Waffle in the development pipeline.

TRT: Focus on experimenting and “playing it by the ear” – vegan Waffle in development? Tell us more about that

Thomas: We are Signing up our master franchisee agreement in 3-4 cities in Spain and with a Chilean franchisee, who owns a lot of stores currently. We haven’t created the company in Spain, I’m doing that right now. First master franchise agreement for 3 cities in Spain. The first store is scheduled to open this year on the 6th of September. It’s been lots of fun but a lot of legal hassle as well. We are excited about the launch and are going to be personally working with the franchisee these last few weeks in Spain.

We were super excited, it was like doing everything all over again, like creating new menu items., We were pretty amazed by the results. We got it, and we are confident that it’s gonna be a hit.

TRT: There are new business models like cloud kitchens, ghost kitchens that people are exploring, so what would be your advice to the people who are exploring this business?

Thomas: There is a highly competitive market I must say. You must have a number and great research on the secret ingredients that make up innovation that no other brand could figure out. Also, making enough money to be able to leave the store for a few hours is what I genuinely think to advise everyone. Don’t even rely only on the belief you will succeed, faith is necessary but not sufficient.

If you don’t believe you will succeed, you’re probably not going to succeed. Since you wouldn’t be even trying. So faith is necessary but not sufficient.

Watch Thomas Schulze-Boing in an exclusive F&B Talks Session With The Restaurant Times.

“You need to constantly innovate the menu to keep the customers...