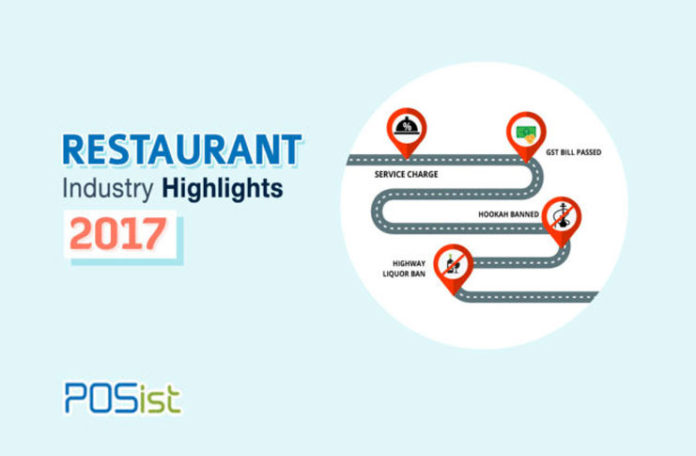 The restaurant industry in India in 2017 saw many changes. The proposal of the GST was welcomed with open arms, but as the year proceeded, some regulations posed significant challenges to the restaurant business. Let us take a look back at how the year 2017 was for the Restaurant Industry.

Restaurant Industry in India in 2017

There have been many government regulations and policies that affected the restaurant industry in 2017. Read on to find out their impact on the restaurant business.

The year 2017 began on a gloomy note for the Restaurant Industry after the government announced the Service Charge to be made optional. The Department of Consumer Affairs asked the states to ‘advise the Hotels and Restaurants to disseminate information through a display at an appropriate place in the hotels and restaurants that the Service Charges are discretionary and voluntary and a consumer dissatisfied with the services can have it waived off.’ The restaurant industry was still reeling under the effect of Demonetisation, and this notification came as a blow to the restaurants. Confusion and chaos reigned as restaurants stood their ground while several customers refused to pay the Service Charge. Restaurants, in turn, responded by clearly mentioning on display boards and menu cards that they levy a Service Charge.

The only ray of sunshine in the otherwise gloom was the passing of the historic GST bill. The Union Cabinet approved the Central GST bill, the integrated GST bill, the Union Territory GST bill and the bill to compensate states for revenue losses arising from a transition to the GST. The new system proposed a single tax rate structure for all. A four-tier tax structure was decided, where a single tax would be levied at 5%, 12%, 18% and 28% instead of the multiple taxations. The GST was implemented on 1st July 2017.

Only a few months had passed since the disputable Service Charge guidelines, did the government drop yet another bomb on the Restaurant Industry in the form the Highway Liquor Ban. Earlier, the Supreme Court had banned the sale of liquor within 500 meters of the highway. In a significant clarification, the Supreme Court included the restaurants and hotels located within 500 meters of highways in the Highway Liquor Ban as well, to be implemented from 1st April. The ruling came as a severe blow to the Restaurant Industry as several restaurant hubs are located within and around the State and National Highways, including the popular Cyber Hub in Gurgaon. The liquor ban impacted the business of several bars and pubs, also leading to the shut down of several establishments.

While many had to shut shops and suffer losses, some restaurants and bars along highways came up with innovative methods to deal with the Highway Liquor ban. At the same time, many states reclassified State Highways as urban roads, thus nullifying the Supreme Court’s order of banning the sale of liquor within 500 meters of a National or State highway. The reclassification of roads was perceived to be an attempt to find a way around the Supreme Court ruling.

The first of July marked an important day in the history of India. The historic GST bill that brought the entire nation under a single taxation system was implemented. For the restaurants, a four-tier GST rate was decided, where the taxes were levied at multiple levels, ranging from 5% to 28%. As per the new GST rates, Non-AC restaurants would be charged at 12%, while AC establishments would be charged at 28%. Five-star hotels and restaurants came under the steep bracket of 28%.

While the restaurant industry was still grappling with the mind-boggling GST taxation system, there was still much confusion about how much GST to charge for the different types of restaurant outlets. The Central Board of Excise and Customs (CBEC) clarified through an FAQ that a uniform rate of 18% would be charged for all supplies from the Non-AC area of an AC restaurant. The clarification came as a blow to the restaurantS with open-air seating, and Non-AC seating with the 18% GST applicable to the takeaway orders as well.

The end of August, however, came with good news for the restaurants and bars as Excise Department in Delhi allowed licensed establishments to start serving liquor within the Municipal limits.

Things started to brighten up for the restaurant industry with the removal of the ban on serving liquor near highways. Specifically for Delhi, restaurants, and bars got another reason to rejoice as Delhi’s Excise Department simplified the process of the application of the Liquor License by making it entirely online.

However, the joy was short-lived as the Delhi government banned Hookah in the Non-smoking as well as the smoking zones of the restaurants. The government asked the Delhi Police and the Municipal Corporations to immediately cancel licenses of restaurants with Hookah Bars.

Amid all the chaos of the Highway Liquor Ban and other government regulations, restaurants were still struggling with the GST. With the advent of November, talks of revising GST rates started to come up. And soon enough, the GST Council decided to slash down the GST rates to 5% for both AC and Non-AC restaurants. However, the rate cut came at a steep price: restaurants would no longer be subjected to the Input Tax Credit. Restaurants in 5-star hotels, that is, who charged a tariff of more than Rs 7500, would be subjected to 18% GST and would be eligible for the Input Tax Credit.

The move, as stated by the GST council, was taken because the members of the GST council felt that the restaurants were not passing on the benefits of the ITC was not being passed on to the customers.

December- Restaurants Allowed to Sell Mineral Water Above the MRP

The end of the year, however, ended on a positive note. Following a petition filed by the Federation of Hotel and Restaurant Associations of India (FHRAI), the Ministry of Consumer Affairs declared that overcharging of pre-packed products such as the packaged mineral water was an offense under the Legal Metrology Act, and could also result in a fine as well as a jail term.

However, the Supreme Court later dismissed the notion by stating that restaurants, hotels, and the likes can sell mineral water above the MRP. The Court said that the provisions of the Legal Metrology Act could not apply to such establishments as there is an element of service involved. The news came as a relief as many restaurants and hotels charge more than the MRP of mineral water. 9 Emerging Restaurant Technology Trends To Look For In 2020