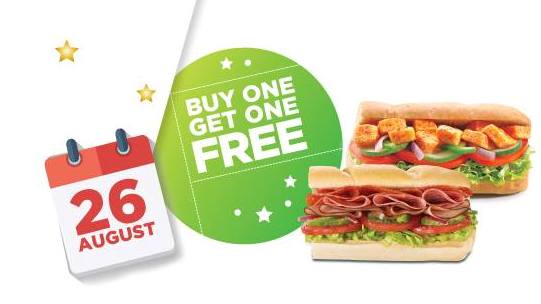 In 2001, Subway started its journey in India by opening its first outlet in Delhi. Today, after 15 years they boast of over 550 outlets in the country and aim to reach 2000 by the year 2020. The expansion of the restaurant chain is happening at a rapid rate and is expected to reach the eight-billion-dollar mark in the next 5 years.

To celebrate their anniversary with their customers, Subway India is introducing a Buy One Get Offer (BOGO) on 26th August 2016 in their restaurants all over the country as a token of their appreciation for their customer’s constant support of their brand. Any customer who orders any six-inch submarine sandwich (sub), cookies, salad and a beverage will get another one, on the house.

To notify the customers of the anniversary offer, Subway India has been actively promoting its celebration on Social Media with #LoveToShareDay campaign. Officials from SUBWAY India stated that the objective of this campaign is to indulge the customers through this offer to make this as special for them as it is for SUBWAY. Mr Talwar, Country Head of Subway India said, “Our guest’s love for SUBWAY encourages us to delight them with not just good food and service but also memories that are deeply cherished and this occasion is appropriate to share our appreciation for our guests who are the centre of SUBWAY’s world’.

Another reason for SUBWAY to celebrate is that they were relieved by the Bombay High Court in a ruling which stated that the company did not have to pay any additional tax on its franchise and royalty fees as they are already paying service tax on the original agreement fees. This ruling has brought forward a sigh of relief for the SUBWAY India group.

The USP of SUBWAY has always been tasty and nutritious menu offerings which can be customized as per the customer’s likes and dislikes. SUBWAY has always offered tasty treats which have catered to the Indian taste buds, both for vegetarian and non-vegetarian customers. With over 500 restaurants in more than 70 cities of India, SUBWAY has been one of the fastest-growing restaurant chains in the country and is expected to grow a lot more.

Premium Casual Dining Restaurants: An Augment of a New Era!