Home Restro Gyaan Decoding The Concept Of Breweries In India 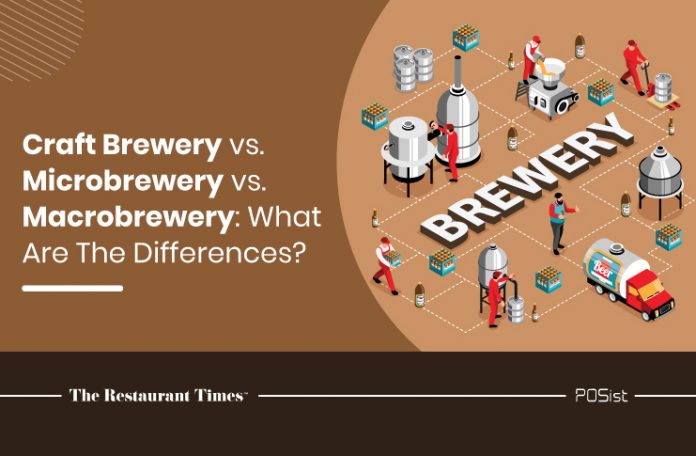 India’s thirst for beer has increased over the years. The rising disposable income of the younger Indian demographic and their development of taste towards beer has led to a significant increase in the number of breweries in India. Presently, this number is higher than 250. The Indian beer market is projected to grow at a Compound Annual Growth Rate (CAGR) of around 11 percent in the forecasted period of 2021-2025, as per the market report Globe Newswire.

With the expanding market, the restaurateurs must know which brewery format they should invest in. This article will put forth the significant differences between micro, craft, and macro breweries. You can choose to serve and brew your beer according to what your budget allows.

The volume of beer produced is a significant differentiator between the different types of breweries. As the name suggests, microbreweries are meant to produce less quantity of beer. They produce a maximum of 15000 barrels (465,000 US gallons) of beer each year.

There are three ways microbreweries can conduct their off-site sales. First, they can follow a three-tier system where a brewer first sells beer to a wholesaler, who further sells it to a retailer, and then the retailer finally sells it to the customer. The second way could be a two-tier system, where the brewer acts as the wholesaler and sells his beer to retailers, who then sell it to customers. Lastly, brewers can also opt for direct sales to sell their products directly via their in-house restaurants or takeaways.

As for the ingredients used, microbreweries have the liberty to use adjuncts with the motive to cut costs. If a microbrewery follows the beer-making standards of a craft brewery, then it can be put under the category of a craft brewery. The vice versa, however, is not valid.

Windmills Craftworks (Bengaluru), 7 Degree Brauhaus (Gurugram), The White Owl (Mumbai), Toit Brewpub (Bengaluru), Doolally Taproom (Pune), and are some of the famous micro-breweries that can be found in India.

However, these breweries still produce more than what microbreweries do and thus lie somewhere between micro and macro breweries. Craft breweries produce 2 million gallons of beer each year and are brewed in small batches with top-quality ingredients. Since craft breweries focus mainly on the quality and the taste of beer, they are obligated to use only the traditional ingredients like malts, barley, yeast, hops, and water to make drinks.

However, when it comes to using adjuncts for cutting costs, craft breweries are limited. They can only use adjuncts if the brewer wants to enhance the flavour or taste of the beer. These limitations exist because these brewers are only trying to maximize the flavour and aroma of their crafted beer and are not in it for the money.

Unlike micro and macro breweries, craft breweries are dedicated to providing premium quality beer to their customers. Thus, more than the profit, they care about the flavour and aroma of the beer. Even so, the profit margin is enough to support the brewery operations since they are just microbreweries gone a little bigger, with high-quality beers selling at higher prices.

Craft breweries are independently owned, and thus, not more than 25% of a brewery can be owned by any other company. Briggs, Bira91, White Owl, Simba, and Kati Patang are some of India’s most popular craft beer brands in India.

Many restaurateurs have now started realizing what their customers are looking for and have thus started incorporating craft breweries into their restaurants and brewpubs.

For instance, Rahul Singh, the CEO, and founder of Beer Cafe’s renowned chain believes that ‘while whiskey remains India’s preferred choice for a drink, the millennials weren’t drinking it. Instead, they had a beer’. As a result, the chain has initiated the implementation of crafted beer into its space since then.

Macro brewers produce large quantities of beer and are primarily in it for profit. More than 6 million gallons of beer come out of national and international macro breweries each year and are distributed worldwide. However, the set-up cost of these breweries is high, and it takes almost 3-4 years to scale up from scratch.

Macro brewers brew in enormous quantities and do not pay much heed to the quality of the beer or the ingredients used and are thus sold at lower prices compared to the beer brewed in the micro or craft breweries. Since the price is lower, brewers produce large quantities of beer to carry out the brewery operations.

Not much attention is paid to the flavour and aroma of the beer, which makes the beer bland and flavourless. Therefore, customers only have to develop their taste to consume these mass-produced beers. Now that you are aware of the differences between micro, craft, and macro breweries, it will be easier for you, as a restaurant owner, to understand what kind of beer you want to serve to your patrons in India. Go for specialty beers or mass-produced beers as per your preferred taste and budget. If you are passionate enough, you might as well brew your own beer for your restaurant!

Tips To Increase Efficiency With A Commercial Restaurant Kitchen Layout

What Is A Barback? Job Role and Responsibilities, Explained

5 Things To Consider Before Going For Restaurant Consulting

Restaurant Customer Feedback Management: Know How It Can Boost Your Business

Restaurant Risk Management Strategies To Prepare Your Restaurant For Any Accident