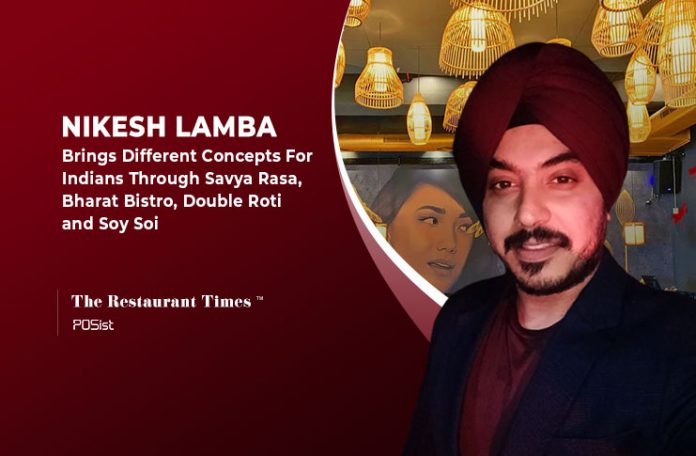 Nikesh Lamba is an accomplished professional with a history of working in the Food & Beverage Industry. He started his career as a Management Trainee at ITC Ltd following which he did his post-graduation from the Indian School Of Business. Later he joined Bharti Walmart as a Senior Manager handling merchandising. Nikesh always wanted to make a career in the hospitality industry and soon he started his first restaurant, Double Roti, with his partner Japtej Ahluwalia. With his expertise and deep understanding of the restaurant industry, Nikesh now owns six restaurants in Chennai and Gurgaon, along with his partners Vikram Mohan and Japtej Ahluwalia.

The restaurants are as follows:

In Conversation With Nikesh Lamba of PGNR Group

In an exclusive conversation with The Restaurant Times, Nikesh Lamba talks of his journey in the industry, the story behind his restaurants, choosing the right location, and a lot more.

The Story Behind The Restaurants

Double Roti, was a joint effort of hospitality entrepreneurs, Japtej Ahluwalia and Nikesh Lamba. Double Roti’s first outlet opened in Gurgaon in 2013 and later in Alwarpet, Chennai. The two partners came up with the concept of a neighborhood cafe serving premium quality burgers and sandwiches. The menu is extensively for people who like American fast food with some Indian twist to it.

For the Chennai market, they launched Southern Spice, a fiery blend of podi, garlic-based sauce with chicken and curry leaves. Their bestselling burger is the Area 69 burger, which consists of beef, barbecue, bacon, Cheddar cheese, and lemon aioli and the Illegal Burger, for which they came up with a chili base: a mix of beans and minced meat.

The second restaurant, Savya Rasa, came into being with a third partner, Vikram Mohan, coming on board. Savya Rasa serves South India’s formidable regional cuisines. Lamba says that Vikram Mohan performed extensive research on  South Indian regional cuisines and realized that South India had much more to offer than the regular Idli, Dosa, and Vada. Their dishes stretch across four states: Andhra Pradesh, Tamil Nadu, Karnataka, and Kerala, covering cuisines like Chettinad Malabar, Syrian Christian, Mangalore, Mysore, and Nellore. The cooks are from small establishments in the South and not from hotels, so the flavors are really spot on and the food is authentic.

Another restaurant, Soy Soi, in Kotturpuram, Chennai serves authentic Asian street food. Lamba says that they’ve recreated authentic dishes from Thailand, Indonesia, Malaysia, Vietnam, Burma, and Singapore. After traveling extensively in different parts of southeast Asia and exploring different varieties of street food, they were finally able to recreate the dishes and come up with the menu.

After bringing authentic Asian flavors to Chennai, Lamba and his partners decided to do the same with Indian food. Their new Pan Indian food outlet in Chennai. Bharat Bistro brings out the eclectic flavors from across the country in the form of a Bistro Cafe. It includes food from Rajasthan, Bengal and South India. Their dishes are authentic and include the following: Slow-cooked Jharna ghee for Bengali cuisine, Kolah vinegar for that perfect tang in their Parsi food and Dabeli masala from Maharashtra.

Their USP is providing authentic food according to the regions and the quality is carefully monitored so that patrons can enjoy supreme quality food! According to Lamba, choosing the perfect location for one’s restaurant is more of an art than science. Location can make a huge difference between a successful restaurant and a good idea that never really got off the ground.  While choosing the location for his outlets, Lamba takes care of the following factors in particular:

Finding the right location is a mix of right ingredients –  visibility, key demographics, and available parking – when cooking up a recipe for a successful restaurant.

Challenges Faced Being In the Restaurant Industry

Lamba says that the most common challenge in the restaurant industry is manpower because it is labor-intensive. The key is to find the right labor and keep them motivated so that they can be retained.  The restaurant business is known for its high turnover rate. When you have to keep hiring restaurant staff, it can cost you more in terms of overall operations and guest experience.

Research by the National Restaurant Association found that 71% of fine dining owners considered filling front-of house-restaurant staff positions as challenging, as did 58% of casual dining restaurants and 56% of quick-service owners. At fast-casual restaurants, 62% said it was hard to fill manager positions, too.

“A healthy mix of food and beverage always adds to the total revenue of any food outlet,” says Lamba.

If a restaurant serves alcohol along with food, the return on investment would increase to a fairly high level. But at the moment, they do not have permission to do so!

If a restaurateur wants to improve the dining experience of their customers, restaurant owners and managers need to keep an eye on technology. The tech revolution has turned once imagined solutions into food service necessities, entirely transforming the restaurant business. Having kiosks, the newest Pint of Sale technology, to handle the transactions allows employees to focus their efforts on back-of-house operations and customer service, rather than having their efforts divided. Lamba has been using POSist at his outlets and says that he is one of the oldest customers of the brand.

“POSist empowers sanitation of all my reports and data which further helps in keeping a quality check on the inventory, preventing wastage, and managing the day-to-day operations. POSist has a seamless interface that helps me track things from the moment a customer enters my restaurant to the point that the customer gives feedback. Being a cloud-based software, I have access to real-time reports at all times.  POSist surely has made life much easier and helped to consume less time,” says Lamba.

Lamba adds that before using  POSist, it would be a task to keep a record of everything from sales to stock data and he could reconcile them at the end of the month. With the cloud-based software, they are able to track minute to minute operations in the restaurant and get real-time reports for the same which further helps them to make corrections and get instant results. Lamba also runs his own loyalty program, named  Eward with POSist which helps in enhancing the overall billing and CRM experience.

In conclusion, Lamba says that it is imperative to stay up to date with the latest technology and keep renewing yourself and the restaurant business with time. One needs to keep striving towards one’s goals to become successful!

How To Enhance Customer Experience With A Table Ordering App

An Interview With Chef Koushik Shankar: A Trailblazer In The Culinary...

Vamshi Konuru of The English Cafe On How Reading the Target...