Home Foodpreneurs Mary Lalboi Of Rosang Cafe Talks About The Challenges Of Running A... Mary Lalboi had a strong inclination towards food since the very beginning. Her love for food kept increasing with time. When she shifted to Delhi, she invited friends to her place and to her joy she realized that people are enjoying the north-eastern meal she cooked. This was the stint that made her realize that she should spread the north-eastern cuisine all around, as it is also very healthy. All of these realizations and her love for food gave birth to Rosang cafe in the year 2002. Rosang Cafe was a fine dining restaurant whose first outlet was opened in 2002 and then a larger venture was started in 2012, but unfortunately, it was shut down in the year 2016.

Mary Lalboi in an exclusive interview with The Restaurant Times talks about the rollercoaster journey she went through. Starting from the story of the beginning of the cafe to the love the cafe received from the patrons, and finally the unfortunate shut down of the cafe, she talks about it all.

The Story Behind Rosang Cafe

Rosang Café was named after one of their children in Mizoram language, meaning God’s gift in Paite language. Rosang’s vision was to serve the most authentic North Eastern cuisines and provide indigenous produce from the far away region. Later, in March 2008, Rosang initiated another outlet at Safdarjung Enclave, followed by its third café at Hauz Khas Village in March 2013.

The entire vision behind Rosang was to open up the gates to North Indian cuisine and bring out the health factor in front of the patrons. Food from the Northeast includes organic farm and garden fresh vegetables, nuts and fruits, unpolished rice, whole grain, and multigrain flours, while its preparation involves soaking, fermentation, boiling, steaming, roasting, sprouting the grains and minimal use of oil.

The thousands of varieties of food from Northeast are good for the health owing to it mostly being organic, homegrown and the methods of preparation and cooking that use less oil and retain maximum nutrients required for the health of the body.

Acceptance Of North- Eastern Food By The Delhi Population

Since the cafe was inaugurated, people had shown immense love for the place. The taste of the north-eastern food was very lovingly accepted. In Delhi, Rosang was the most celebrated café among all North East cafes and restaurants around. The cafe spelled the real essence of North East India too. The interior had paintings exhibit all the eight different North East states. Lalboi tags Rosang as a spice-friendly café. All the ingredients used in the cafe were imported from 8 prominent states.

Though the task was not easy, she wanted her customers to taste the real North Eastern flavor, in every possible way. “I had people who supply stocks from all the states every week; I know it isn’t easy, but that’s the only way it works. I didn’t want to see my customers leaving the premises unhappy and unsatisfied,” says Lalboi. 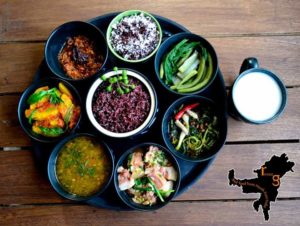 The importance of location has always been talked about – how it can make or break a business. In the case of Rosang Cafe, it was the location that led to its ultimate shutdown.

There were two outlets of Rosang cafe; one was in Munirka and the other was in Green Park. The one in Munirka as was not located in a commercial place. According to Lalboi, Rosang got shut down because the landlord wanted to break the building and wanted to reconstruct the structure. So the entire focus shifted towards the major outlet in Green Park. Unfortunately, there was a sewage issue that was quite prominent but was ignored. Finally, in 2016 the entire sewage got blocked and infected, this led to the shut down of the final outlet’.

‘The entire market was getting infected, we tried cleaning it ourselves but the flow kept increasing, and the entire blame was on Rosang which we never expected. I visited the MCD office since the problem had cropped up but at the time when the problem was small, they did not give any heed to it and finally when the problem piled up and the sewage entirely got infected. The MCD straightaway asked to close rather than taking any sort of action. Unfortunately, Rosang got shut down. Bouncing back is really tough as the rental is very high so we are taking it slowly but Rosang will come back very soon’, says Lalboi.

According to Lalboi, if someone wants to start a venture in a highly priced rental place/ commercial place, they should understand and well research about the market, the foundation, and the structure beforehand. It is very important to study the surrounding of the place. This will keep them protected in the long run. The first thing one should know before starting a brand should be studying the market and secondly, all the legal implications have to be taken care at the initial stage to ensure their survival.

Market analysis is essential for finding the best location for a new restaurant. ‘Analyze potential locations and their access to customers, the size of their parking lots, and their proximity to your equipment and food suppliers,’ says Lalboi.

According to Lalboi, the insurances and licenses need to be in place before a restaurant can open. There are many laws that administer running a brand including the ever-changing labor laws. Ignorance is not an excuse if a law is recklessly broken. The fines and penalties can be quite significant and will lead to drastic consequences later.

Silence is not always the weakness and so Rosang is definitely coming back. ‘The Rosang team is already studying the market and we are looking for a good commercial place, but we are making sure that we don’t repeat our mistake. For starters, we are looking and studying the market to get hold of the most ideal place to start the brand yet again. This time Rosang is going to come up stronger as since its shutdown I have been exploring and visiting various countries and areas of north-east, especially the villages to understand and learn the traditional ways of cooking northeastern cuisine’, says Lalboi.

Lalboi concludes by sharing that the Rosang team is coming up with a food chain in 2019 in Manipur and the entire year it will be seen spreading. A central kitchen is to be opened by the mid of 2019 from where supplies will be spread across.

Creating a menu is a crucial task for dining establishments, but it can sometimes be tricky. However, a bigger menu is not always better....

8 Simple Steps To Perform A SWOT Analysis For Restaurants Successfully

Raise the Bar Higher: An Interview With Himanshu Gupta, Founder of...

“Restaurateurs should stand in customers’ shoes to understand the market demands.”...