Home Foodpreneurs “Don’t bank upon the franchise model business unless your operations are robust.”... 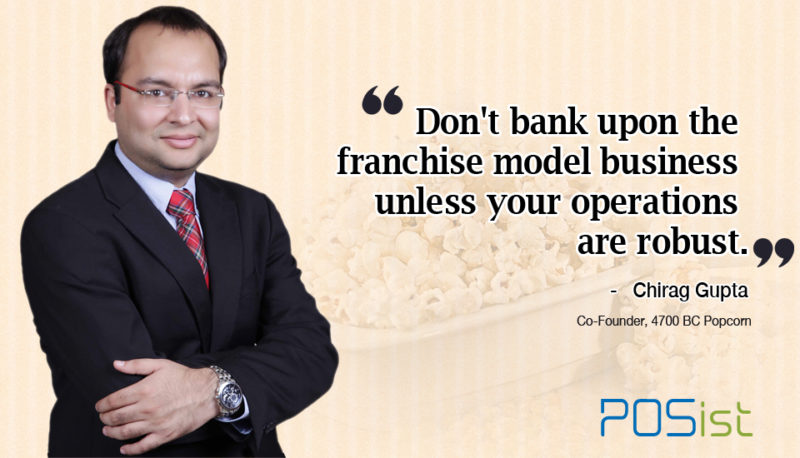 After a five year long stint with Deloitte as a consultant, Chirag Gupta, founder of 4700 BC Popcorn thought of launching his own venture.  After meeting Ankur Gupta, his Co-Founder and Partner, things started building in the right direction. They both listed a few business ideas which they wanted to enter but finally zeroed down on the “Gourmet Popcorn” business which was missing in India. At present, 47000 BC popcorn is present in seven locations spread across Delhi NCR. The company also plans to open 10-15 new stores in different cities in next one year starting with Bangalore and select cinema halls of PVR.

Chirag Gupta On How He Brought Gourmet Popcorn to India

Chirag Gupta shares his thoughts and experiences about his business, challenges they faced and talks about franchise model with Restaurant Times by POSist. Edited Experts:

POSist: You come from an IT background and have been associated with consulting in the United States. What was the motivation or reason for starting the Gourmet business? What were the other businesses you initially thought of when you came back to India?

Chirag Gupta: Like all entrepreneurs, after quitting my job it was not very clear what I wanted to do. But I was clear about starting my own business. To start with, I met a lot of friends in India who were already into their business to get the flavour of what exactly happening here as me being in U.S was not clear about the real picture of India. Then, I came across one my friend Ankur who is my partner now. He was running his father’s business and he was also keen to start something new. And the whole idea in my mind was to do something unique. We explored a lot of ideas such as digital e-books, healthcare, and food. We explored all the ideas and worked upon all the three areas. Since I am coming from IT background e-books were exciting but one on the food side ‘Gourmet popcorn came up which was equally enticing. I had seen this particular product Gourmet popcorn U.S and Ankur having travelled a lot of countries was also aware of this product.

Gourmet Popcorn was missing in the India market which unique and can bring a value proposition to the customers.

We started working on this and went across the country to check which all brands were already there and we realized all of them were at a very primitive stage. There were only a few flavours like cheese and caramel which is not gourmet. One thing led to the other, and then the day came in when we ordered the machinery and corn. We also thought of taking a master franchise but honestly, whatever we had invested could have gone in paying upfront for the master franchise. It was not viable at all.

POSist: How much investment you have made till now?

Chirag Gupta: Before PVR coming into the picture, we have invested Rs 1.5 Cr into the business since we started. With fresh investments from PVR, we have a new set of plans for future. We are investing a lot of money in backend operations so that we can get into any volumes and any compliance. If we take the sum of all the money we have invested, it would be around Rs 4-5 Cr with the majority of investments coming from PVR which has been used to make the backend strong.

POSist: How many flavours do you currently offer?

Chirag Gupta: There is no limit to the number of flavours. We started with 18 flavours but depending on the outlet and its potential we keep on changing the numbers from 8,12,16 or 18. The idea is to cover the different categories of flavours at each outlet depending on the city and target audience. For online we try to present more options to customers and at outlets, we try to keep it between eight to sixteen.

POSist: You are altogether a new product category. How tough was it to pull the customers at the initial stage?

Chirag Gupta: For us, there were a couple of things that worked. One of them is positioning, and that credit goes to Ankur. We entered the right location and in the right mall. Our first store was at DLF Saket which already had a niche crowd. So, we decided to launch our product at that level, which was a good positioning for us. So, nobody was comparing it to the butter popcorn and other stuff. The positioning done was right and what we also did is that we opened in a format where people consider it as a gourmet product and outlet. It caught the attention and eyeballs a lot of people were interested. Once we opened, the initial journey was easy. We also did the sampling just like ice cream parlours; giving out samples to our customers to taste so that can buy what they like.

POSist: What were the challenges you faced when you open your first outlet three years back?

Chirag Gupta: Initially, we just focused on opening the outlet and not on marketing in a big way. We missed the part on how to get repeat customers and customer data but we have learned with time. Now we are opening a store in Bangalore. So, we are already thinking how to market it and make sure customers come in. We are also thinking how to get into the media to create the right buzz. At the initial stage, we never thought of hiring a PR agency. Those were the things which did not allow us to create a big buzz we would have created at the initial stage.

POSist: What is the relationship between 4700 B.C and PVR cinemas?

Chirag Gupta: PVR has come up as a strategic investor in the company. They have bought more than 51 percent stake in 4700 BC Popcorn but they wanted us to run the company. We have come with a strategy that where we will open outlets in certain cinema’s where the footfall is high and enter all other cinemas with packaged popcorn. We would be launching the packaged popcorn by Diwali this year.

POSist: Are you looking for the franchise route as well?

Chirag Gupta: Honestly no, we gave franchises in the past when we were not associated with PVR. We realized that one should give franchises only when the business operations are robust. That can only happen once 15-20 stores are in place. So giving franchise is not recommended by our side. However, it is good on the cash flow side, you get presence and franchises are always lucrative. But managing operations is not always easy in the franchise model. One of the keys is that if the franchise outlet does well there are no issues but what happens if it does not do well. You have to face a lot of issues like brand dilution and image can be spoiled.

POSist: What are your expansion plans for 4700 BC Popcorn?

Chirag Gupta: We are now moving into the new cities like Mumbai, Bangalore, and Hyderabad. We will open 10-15 new stores in next one year.

You can watch the full interview here:

Is The Second Wave Of Covid-19 Around? Find Out How Restaurants Can Prepare For The Future

Rebranding is a great exercise to stimulate business growth while reaching out to a new set of customers. Rebranding a restaurant business becomes necessary...

6 Tips UAE Restaurants can use to Control Restaurant Inventory and...

Customers are at the Center of a Wave of Reinvention and...