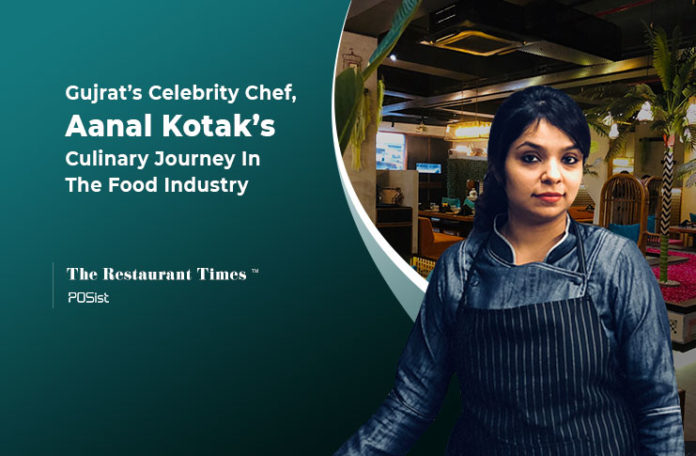 Celebrity Chef Aanal Kotak started with her journey in the restaurant industry ten years back. Aanal is an undaunted and supremely talented individual. So big was the desire of becoming a chef for Aanal, that she ran off from her own engagement ceremony, to appear for auditions in a regional cooking show. Today she runs a chain of restaurants in Ahmedabad, Surat and Vadodara by the name of ‘The Secret Kitchen’ and ‘Akshada’, also a vault cafe named ‘ The Baking Couture’. Within two years of starting her first outlet in 2017, Aanal owns five outlets now.

Aanal completed her graduation from NIFT. Her unrelenting love for cooking and Indian cuisine could not stop her from changing her path from a designer to a renowned chef. From a Professional culinary expert to a fashion designer down to a versatile cook, Aanal can be described with so many titles. She is better known as ‘Youngest Cooking Expert’ after she won the cooking show by Colors Gujrati at the age of 20. Another feather was added to her cap when she was recognized as “Chefpreneur of The Year” in 2018.

In Conversation With Aanal Kotak of The Secret Kitchen

In an exclusive conversation with The Restaurant Times, Aanal Kotak talks of his journey in the industry, the story behind The Secret Kitchen, ensuring customer satisfaction, marketing strategy and a lot more.

The Story Behind The Secret Kitchen

Aanal’s love for Indian Cuisine made her start with The Secret Kitchen- A Vegetarian Saga. It is a culinary paradise that serves Royal food inspired by the ancient recipes of India. The Secret Kitchen has an open kitchen and the operations are clearly visible to the public.

After a lot of research from the Royal families and understanding their kitchen, how they made their own spices from the edible flower, flower petals, etc. Aanal took inspiration from them and started making her own spices. To date, she makes her own spices for The Secret Kitchen and it is supplied to all other outlets.

The Secret Kitchen’s menu includes dishes from all parts of India- North, South, East, West. The menu is absolutely inspired by Indian Cuisine and only consists of 20% of the International Cuisine. 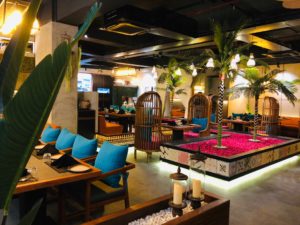 ‘I asked them questions related to hospitality, but no one could answer the questions. They did not use hand gloves in the kitchen nor the chef cap. There were no basic rules they would follow,’ says Kotak.

Kotak started recruiting the staff from outside Gujrat but it took a lot of time and effort. So, she overcame this challenge, by training the local staff by designing a training module on her own.

“We are the first restaurant chain in Gujrat, to train the staff two months prior to the opening of their any outlet. We give them compensation as well. It is just like any institute having candidates who are preparing for something,” says Kotak.

Kotak wanted all the staff members to be trained thoroughly to deliver exceptional customer service to the patrons. The staff at The Secret Kitchen are very careful in manners and etiquette. The Secret Kitchen pays utmost importance to hygiene. They make sure everything is neat and clean.

Gaining Acceptance From The Patrons

The Secret Kitchen’s menu is purely influenced by the ancient Royal Indian Cuisine and also different regions of India. Starting from the name to the preparation of a particular dish, everything is inspired from the Royal Kitchen of India.

“Patrons like having their usual Kadhai Paneer whenever they visit a restaurant. But we at The Secret Kitchen are trying to educate the patrons about what the dishes are actually about and what does it consist of,” says Kotak.

The menu is thoughtfully designed and is very unique from a regular restaurant’s menu. The Secret Kitchen’s menu consists of dishes such as Patiala Kabab Paneer inspired by Amritsar, Chandini Chowk Ki Tikki which is inspired by Delhi and the actual spices are used which are brought straight from Delhi, to make the dish authentic. This dish comes straight from the Queens Palace of Delhi. Initially, Kotak had to educate the staff at The Secret Kitchen about the dishes in the menu and what exactly goes behind every dish. The history related to each dish was in-depth and it was new for the staff. To educate the staff and then educating the patrons was tough initially. Slowly and steadily they gained acceptance.

Striking A Balance Between Three Different Formats Of Restaurants

Kotak owns three different formats of restaurants. Initially, it was a very tough task to manage and operate all the total of five outlets.

The Secret Kitchen- A Vegetarian Saga located in Vadodara and Ahmedabad, is famous for recreating dishes of the grandeur of Royal India.

The Baking Couture inside The Secret Kitchen is a Vadodara based artisan bakery and cafe that takes traditional healthy ingredients and gives them a modern taste edge. It’s a one-stop store for delightful cakes, tempting pastries,  biscuits and cookies, mouth-watering chocolates, baked goodies both home-made and imported from far and wide. Its concept is inspired by the world.

Akshada, located in Ahmedabad,  is one place where people indulge in the recipes that are not only unique or unusual but completely forgotten and tampered in the industry. Every dish on the menu of Akshada has deep roots in traditional recipes passed down with love from generation to generation in various Families across the state. There’s a myth in the world that Gujarati Food means sweet. Many people don’t know that the spiciest cuisine is also from a part of Gujarat. Recipes from the region of Gujarat, Saurashtra is the spiciest dishes in India.

Kotak is a treasurer of the Indian Culinary Books and its a source for her inspiration while she is deciding on the menu. The latest 2.0 menu to be launched in Baroda is inspired by the core recipes of India incorporated in a way to suit the taste of the localities without playing with the original taste of the dish.

According to a report by NRAI, last year in 2018, it states that 74-75% of millennials prefer ordering food online. With this radical change in dietary habits and the fast growth of technology is changing the food market swiftly. This so-called digitalization of food delivery enables fast delivery of takeout food with less human interaction.

According to Kotak, Restaurant delivery services can be beneficial for both the customers and the restaurateurs, but there are a few downsides to consider as well. For small scale restaurants, who do not get sufficient dine in, it is a good opportunity to opt for the online delivery partners as they help the restaurant to boost sales.

Kotak tells that the biggest nuisance is the steep discounting game which has started to hurt margins. It is ruining the society and also, the restaurant industry. The patrons get used to such discounts and the restaurateurs have to forcibly reduce the quality of the food because there are no other fixed costs whether they can compromise to provide the patrons with such discounts.

“Ordering food online is helpful and restaurants gain from the extra visibility. But who is blistering in the profits?” says Kotak.

Kotak adds that the online delivery partners brainwash the restaurateurs in implementing such discounts.

“Online delivery partners try to influence the newbies in the industry by making them understand that they would bear 35% of the total.  The average food cost for any restaurant is 25% – 30%. The commission which these online delivery partners charge is close to 20% – 25%. Apart from these charges, the restaurateurs also have to pay for overheads which include packaging, compensation, etc.  So, in the end, the restaurateurs have to pay for the delivery from their own pockets,” says Kotak.

It should be a win-win situation for the restaurateurs as well as the online delivery partners.

The POS serves as the central component for your business; it’s the hub where everything like sales, inventory and customer management merges.

The right POS system can streamline every operation of your restaurant, bar, or cafe, from orders and payments to your entire ingredient inventory.

Initially, everything was manually done, it was difficult to control the staff, keep a record of cash flow and sales but with the coming of POS software, the processes have become very simple.

“We were the first ones to used POSist in Gujrat. I am usually out of town and having multiple outlets makes it difficult to keep control of everything, but POSist is indeed a blessing for us. I can access all the reports on my phone at any time of the day and keep a check at all times. The anti-theft module is one of the best modules, it gives me timely notifications whenever a bill is void or if any fraudulent activities take place,” says Kotak.

Kotak while concluding says that it is imperative to work for the credit of building your brand. Quality service should be of utmost importance to any restaurateur. Money is the by-product which will follow once you build your brand.

Saad Majeed Of Majeed’s Reveals What It Takes To Run A...