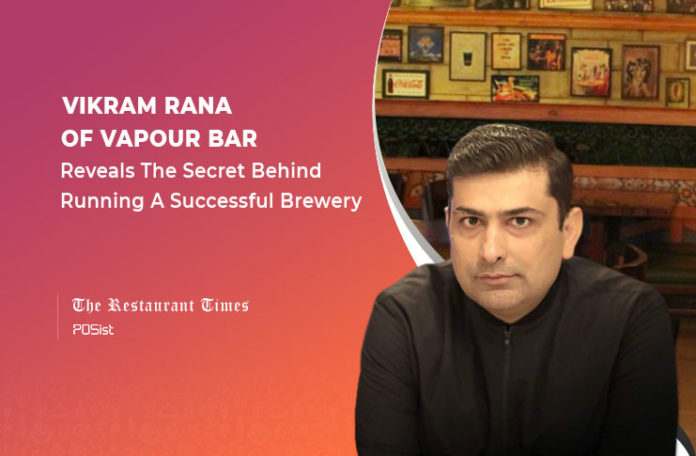 After spending almost half a decade studying chemical engineering in India, Vikram Rana transitioned into a new role of a restaurant owner. The journey of entering into the restaurant industry began with the opening of Mojo, Gurgaon, in the year 2002 which led to his beginning of being a restaurateur. “As I think back through the projects I’ve worked on, like Mojo, it started merely out of passion. It’s amazing how the conversations over food and few glasses of beer can act like an ingredient that transforms a childhood dream into something special,” Rana recalls. This passion led to the beginning of Vapour Bar.

In Conversation With Vikram Rana Of Vapour Bar Exchange

In an exclusive interview with The Restaurant Times, Vikram Rana talks about the growing brewery culture in India, and all about the Vapour Bar Exchange.

Vapour proudly anchors to be one of the “few” to offer a dizzying array of pumpkin ale, mango ale, and its signature wheat beer. Today, Vapour is every beer enthusiasts favorite. Often crowded, the room is graced with youngsters, and mainly women, who play a pivotal role in generating business in all the outlets across India. As an extension to these restaurants, two new ventures were added to the kitty in the year 2017, a branch of Vapour Bar Exchange on the Golf Course Road (Gurgaon), and Vapour in Hyderabad and Sarjapur (Bangalore).

Cooking Up A Fresh Concept

For Rana, Vapour Bar is a continuation of his passion for building, developing, and uniting consumers at his restaurants. Vapour Bar was born in 2010 which is spread over a whopping area of 18,000 square feet of space. In 2012, a new branch of Vapour came up in Bangalore’s upmarket 100 feet road, Indiranagar.

According to Rana, over the last few years, brewed beer has become a trend in Gurgaon. Vapour bar exchange offers about eight different variety of beers from dark stout to traditional Indian pale ale and favorite wheat beers of Belgium. It is also the only place which offers ALE beer in Delhi.

Soon after creating Vapour, the gastronome within him pushed him to open two outlets of microbreweries in 2015 – Vapour Bar Exchange in Sohna Road and Sector 29 of Gurgaon, respectively. Following this, a new outlet of Vapour Bar Exchange was launched in Hauz Khaz in the year 2016.

“Vapour Bar Exchange has live screens on the walls. It displays the rates on the screen for liquor which increases and decreases as per the demand of a particular drink.”

Challenges Of Running A Restaurant Business

Getting into the restaurant business is quite risky. A majority of restaurants that open mostly fail during the first year of operations, a fact Rana was well aware of when he entered into this industry, just when the Indian market was getting acquainted with the concept of craft beer.

“It wasn’t easy to take a chance on this dream. Gurgaon had never been a beer market; people here have primarily preferred hard liquor. Unlike Bangalore, drinking is not a social phenomenon here in Gurgaon where friends catch up in the evening over a glass of beer. So we had to start from scratch and create a culture of that sort,” he adds.

According to Rana, the majority of reasons for restaurant fail are avoidable. Restaurant owners often have an idea and lots of motivation, but little understanding and experience. Many factors go into running a successful business, and many owners do not realize the skills and knowledge needed to start and keep their restaurant thriving.

“The industry and economy are changing. Restaurateurs must stay abreast with the trends, regulations, and the consumer demands to survive in this business.”

Choosing The Location For A Brewery

According to Rana, there are many considerations that are to be analyzed while choosing an ideal location for a brewery, both business and legal that are important to look for while choosing an ideal location for a brewery. From a business perspective, the issues include whether space has an area for both present and future operations. It is essential to make sure that the electricity and plumbing facilities are adequately available. Also, a proper system to handle transactions and waste disposal is a must.

It is vital that a brewery is set in a place with an abundant supply of water, as an ETB plant is set to make sure that whatever waste comes out has ample space to be treated and disposed of because beer production requires a continuous water supply. Power and water are the two most important things that a brewery needs and these points should be analyzed well.

Importance Of Licenses For Breweries In India

Most brewery owners face the same set of questions and challenges when they decide to take a step toward opening their craft brewery. Opening a brewery involves a lot of groundwork, the most important one being aware of the state and federal laws and then executing things in the right order. According to Rana, when applying for a brewer’s license in India, it is important to prepare all the important documentation concerning the finances, and the property your brewery will be in. Bar license is the most important one. Once you have the bar license, then only one you apply for a brewery license.

According to Rana, social media opens the chances to interact with your customers and keep your business on the front of their minds when they aren’t even there.  By having a platform on social media, you give your customers the power to leave reviews and comment, share photos of special events in their life and mention your brand as a place to celebrate.

Today, Vikram Rana is a proud owner of microbreweries across different cities and plans on expanding his business. Rana concludes by saying, that currently, he has seven outlets of Vapour Bar, and is planning to open three more this year spread across, Mumbai, Goa, and Bangalore. He signs off with the words, ‘Consistency in terms of quality and quantity is the key that will keep customers coming back.’

How Puja Bhatia of The Conical Twist Made Indians Fall In...