Ashit Goyal, born and raised in Chandigarh, is a CA  by profession. Ashit was always fascinated with the art of cooking. He got involved with his father, Arun Goyal, in the operations of Beer Castle, Panchkula. Beer Castle is a captivating spot in the city with a refined urban vibe. It is a microbrewery with a restaurant and terrace lounge. With rich interiors and expert service, this is hands down the pick of the crowds. Their extensive menu spans various cuisines. It serves a range of beers as well. The hunt for the best craft beer in the Tricity- the urban areas of Chandigarh, Panchkula, and Mohali – ends at the Beer Castle. Their in-house beer comes in six exciting flavors that are completely satisfying!

In Conversation With Ashit Goyal of The Beer Castle

In an exclusive conversation with The Restaurant Times, Ashit Goyal talks of his journey in the industry, the story behind The Beer Castle, operational challenges faced, and a lot more.

Beer Castle, situated in Sector 8, Panchkula is one of the finest breweries in Panchkula. The ambiance is engaging with multiple options for patrons to sit: indoors, in the gazebo or on the rooftop with an expansive view of the hills. The atmosphere is undoubtedly electric. Also, the food offered is scrumptious with a unique twist that will linger on one’s palate. Cigar Rolls and Natkhat Cake are highly recommended options from the menu.

Coming to the beer section, Goyal mentions that they do not compromise with the quality of beer at all, they import malts made using German technology. Their main focus is to serve superior quality beer to the patrons at subsidized prices. They have four types of beer, the first being the wheat beer, the second is the premium lager beer, the third is the Amber Dunkel beer which has a fruity flavor to it and the fourth is the dark stout beer with a flavor of roasted coffee. They also serve seasonal flavored beer, according to the seasons. Last month, they had the Pineapple flavor and this month they have Apple Cider flavor. Not to forget their innovative mocktails, which is a thumbs up! 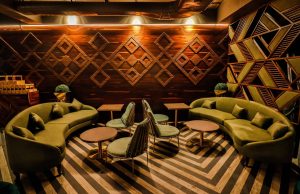 According to the All India Brewing Association, craft beer sales are increasing at a striking 20% year on year. Consequently, the number of microbreweries in India has grown from just 2 in 2008 to 80 in 2018. The Tricity accounts for 20% of this growth. The Tricity’s tryst with craft beer began in 2010, with the setting up of Hops and Grains in Panchkula.

Beer Castle has introduced a revolutionary culture in the Tricity area. It is a place to chill out with friends and family with the promise of some bodacious brews, fabulous foods, and supreme experience. Beer Castle has four levels.  Goyal says that the basement is for corporate events and social gatherings, which can accommodate twenty-five to thirty people at a time. The sky lounge is for live performances which adds a zing to the evening. The alfresco is a picturesque place where you can have family brunches, a sky-lit indulgent date with your special one or simply enjoy the view of the hills. The club has vibrant lights to make it an ultimate spot for hosting swanky parties.

According to Goyal, the patrons in the Tricity are very open to experimenting with different cuisines and want to try out a new location every time they step out. Panchkula alone does not have enough places for the Tricity population to explore. Goyal wanted to offer the patrons an all in one solution and that is how he came up with this concept. Beer Castle perfectly blends and presents the best of both worlds for the city’s party lovers. From the experience to the service, Goyal is very particular about all the minutest details. Unconventional, unique and novel are how one would choose to describe Beer Castle in Panchkula.

Operational Challenges Of Running a Microbrewery In The Tricity

Guest expectations are changing, providing a consistent brand experience is growing more difficult, and restaurants are struggling to keep up with the trends.

According to Goyal, acquiring licenses is a major challenge in Haryana. The license fee is comparatively high as well. Restaurant permits and licenses are surely not the motivating reason to enter the restaurant industry. But if you want to take your cuisine, special cocktails or beer to the world, you’re going to require the right permissions. Goyal adds that while he was acquiring the licenses for Beer Castle, elections were going on in Haryana and it took him three to four months extra in order to acquire them. Recently,  an online platform has been launched for applicants to file requests for licenses but back then they did not have any alternative to visiting the municipal office in person.

The second challenge is that Panchkula not being a very big town, has a small client base. In addition to that, the liquor is expensive. Goyal mentions that there is no healthy competition in Panchkula but in order to stay ahead they have had to slash the prices of liquor by a high margin. Goyal has thoughtfully found a solution to this problem, he chose to cut down on other expenses.  He does not have to pay rent because it is his own property, that is how the financials work out. The use of Point Of Sale (POS) applications has gained traction in recent years. Even though the most basic function of a Point Of Sale system is to electronically process transactions, the latest systems are equipped with multiple features that cater to the end to end requirements of restaurants.

These features effectively help managers and staff in managing not just the Front House, by integrating the kitchen and dining area but also provide other aspects such as logistics and operations.

There has been an exponential growth in the craft beer industry in the last four years, due to radical changes in consumer trends and beer consumption, leading to growth in the number of microbreweries. Any big or small scale microbrewery requires continual monitoring of its operations to boost sales and reduce wastage, for starters. Achieving these goals would demand well-organized planning and integration of a proper microbrewery POS system.  A microbrewery POS will help your head brewer to minimize human errors and have all information relating to operations on one screen. Goyal has been using Posist in his outlet.

“I have been using Posist at Beer Castle. Posist, being a cloud-based application, does not result in data loss because of networked backups. I am fully aware of all the operations going on in the outlet, even in my absence. Easy order taking and reduced dependency on physical records has helped a lot,” says Goyal. 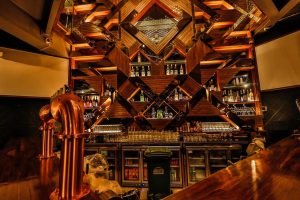 Goal At The End Of Each Business Day

Goyal says that his goal at the end of every business day is to serve premium quality food. A wide majority of youngsters consider food quality to be the number criterion while choosing a restaurant. Quality food ensures repeat sales without fail. At Beer Castle,  it is ensured that the food served is of supreme taste and quality.

Goyal concludes by saying that his motto is establishing a strong brand value. It is not only about creating a relevant presence for itself in the market but is also a continuously evolving process. It encompasses every aspect of daily restaurant operations.

Creating A Sense Of Anticipation And Community Are The Major Ingredients...

Bringing Authentic American Pizzas To The Tricity Through The Pizza Kitchen